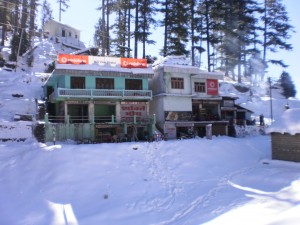 ranges in Himachal after cold conditions intensified on Sunday morning.

Reports reaching here said that heavy to very heavy snowfall has been witnessed in the entire snow-line belt of the state, bringing life almost to a standstill.
Major tourist destinations also had abundant snowfall as Dalhousie in Chamba, Manali in Kullu, and Narkanda in Shimla received about 50 cm snowfall, Kufri and Fagu 45 cm, Shimla town, Chamba, Chail and Kasauli of Solan about 3 cm snowfall.

After heavy snowfall, Chamba, Lahaul Spiti, Kinnaur and many parts of Shimla district were cut off due to blocked roads. Report arriving from Chamba said that the entire district is under white cover. The Chamba-Pathankot highway is blocked near Banikhet while Chamba-Killar, Tissa, Saluni and Bhamaur roads were also reported closed. 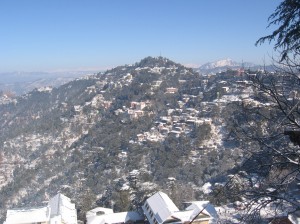 Most roads in Shimla too are closed for vehicles due to snow. Water supply too has been affected. Traffic to the upper areas of the district is completely off as the 375-km-long Hindustan-Tibet highway is snowbound and the frozen road is creating problems at Mashobra (via Basantpur), Dhalli, Charabora, Kufri, Theog and Narkanda. In the morning buses could not operated even to Totu, thereby snapping traffic link with Shimla-to Manali and Dharmashala. Traffic is also off on Chopal, Jubbal-Kotkhai and Rohru roads due to two feet snow at Kharapather in the district. Officials told HimVani traffic is likely to be diverted for Rohru via Ponta-Sahib.

Road to Kinnuar is off at Kawari as there is 30 cm snowfall at Recong-Peo, two feet at Kalpa and Sangla and 3 feet each at Chitkul. Similarly, Lahaul-Spiti reported 2 ft snowfall at Koksar while Rohtang pass reported 6-7 feet thick snowfall. Lahaul and Spiti could not be linked with chopper flights as well for the third continuous day.

High reaches of Kullu like Solan Nalah, Mari, Ranibag and Jalori Jot reported 2 to 3 feet fresh snowfall, while high reaches of Mandi like Shikari-Devi and Karsog also got snowfall in the district. Dhauladhar of Kangra, Churdhar of Sirmour district also reported heavy snowall whereas downstream areas were lashed by the light to moderate to heavy rain.

Current spell of rain and snow is now over in the state as high reaches were overcast while middle and low ine areas were foggy. The Met office forecast rain or snow in high reaches of state while it would remain dry in rest of the state.