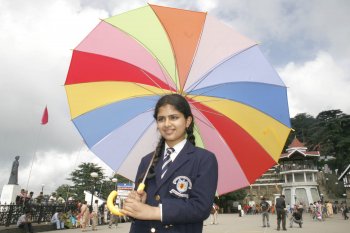 The best thing about a place like Shimla is that you can be a star and still manage to take a stroll down The Mall without getting mobbed by your fans. As Shreya, the new star on the horizon – our own lovable Biniya from the equally lovable film, The Blue Umbrella, trudged across the Ridge, on her way back home from her school, it had to be HimVani to spot her.

A request for an interview and a photo-shoot soon caught the attention of the passers-by. The youngsters were the first to recognise her. Soon, there were hand-shakes all around and requests from tourists to pose with them.

Finally, when we settled down for the interview, we weren’t surprised to find that it had been a hectic month for her so far. From the première in Mumbai on August 8, she is just back from a screening of the film at Chandigarh’s Fun Republic and answering a thousands of questions from TV News channels.

Tell her that she’s acted well, she answers, “My performance was a surprise for myself too.” While her younger brother Kanha, is her “biggest fan”, she herself is a fan of Biniya. “I think, now I have also become a fan of Biniya,” she says.

Her friends Priyanka, Kshiti, Pious, Siya, Gitika and Shipra, who all study with her at Sacred Heart Tara Hall School are eager to see the film themselves on coming Friday. 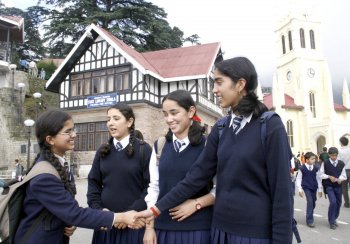 Shreya was lucky enough to taste the real flavour of Bollywood during the premiere of The Blue Umbrella on August 8 in Mumbai. “After the shooting at Dalhousie got over, I was totally out of touch with the entire crew. The premiere was like a reunion.”

The biggest compliment for her acting so far befittingly has been from an intense actor Ajay Devgan. “He walked up to me and said, ‘You and Pankaj took us to another world. You are going to grow up to be a great actor.’ Besides, my brother Kanha hasn’t stopped complimenting me.”

Oh yes, even, Vishal Bhardwaj and Pankaj Kapoor too “were all praise for me during the press conference at the Mumbai première.”

So far there are no more film offers for Shreya, but she plans to try her hand on a few more such projects.