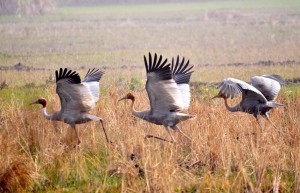 in Una. Bird watchers were excited after sightings them in paddy and agricultural fields on the bank of Swan river. Saraus Crane is the tallest among its 15 species in the world, having distinguished features like contrasting red head, height of about six feet and wing- spread to about eight feet.

Renowned bird photographer Prabhat Bhatti shared this rare picture with HimVani as it got clicked in Nangal area of Punjab. He said he has spotted this bird number of times in the area, whereas its number is dwindling in the world. He clicked two chicks and a female Sarus flying along the ground at riverbank of Swan adjoining Talewal industrial town. He told HimVani that this is the first time he has photographed two chicks while earlier he had only spotted adults (three pairs) in the area, as he has been monitoring this vulnerable bird in the area for more than six years.

Giving good news to bird watchers, he said presence of chicks show that they had started breeding in the area. Beside Himachal Pradesh, the bird has also been spotted in Gujarat, Uttar Pradesh and Punjab, but their numbers have been coming down sharply, which is a matter of concern for the bird watchers and Zoologists in the world.