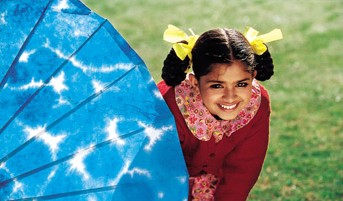 First things first, The Blue Umbrella, a UTV production and Vishal Bharadwaj directed movie, based on Ruskin Bond’s novella by the same name, is a treat to watch, not only for the acting prowesses of Pankaj Kapoor and Shreya and the story, but also for its cinematography – highly recommended for Himachalis outside the state, whether be in India or abroad – that shows Himachal in its true colours and real flavour.

Nobody’s captured Himachal better than Sachin K Krishan, the Director of Photography of The Blue Umbrella – the hills, the mountains, the valleys, the snow, the small shops, the wooden chai shacks, the old stone houses, the khet and the khaliyans. For the uninitiated, the movie has been shot in Khajjiar. Even the costumes and characters are just out of a Himachal hamlet, except that children are shown in monkey caps – irrespective of whether it’s winter or summer. The monkey caps are more likely to be worn by Bengalis – all children and old – rather than Himachali children.

It’s recommended to feel the nostalgia. The director has tried to retain the local flavour – the soopa, the woollen coats, the choolah, and the pipe to blow the fire and the accent. Watch out for Pankaj Kapoor, who plays Nand Kishore Khatri and Shreya Sharma, playing as Biniya (the protagonists of the movie). Raja Ram, the cunning helping hand of Nand Kishore, Masterji and his wife Lilavati aka Lily too are likeable. Hmmm… even the music – Jhoome nacha jo jana meri lal chidiye, plays in the background very often – thankfully, retains the traditional flavour and stays clear from the modern day remixes. Kudos to Vishal Bharadwaj for doing a good study of Himachal culture.

I won’t go into the story or the plot as it’s all over the net. However, we have an interview of Shreya, courtesy, Heek, a children’s magazine.

Now where can you watch it? either at a theatre near you or on your computer after downloading a 90-minute, high quality (2.5 MBPS) 1.77 GB file size print from indyaondemand.com for $9.99. It’s worth it. The movie is available on the ‘Download to Own’ model. However, soon, the ‘Download to Rent’ model too would be introduced.