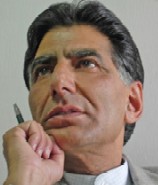 The 30-minute archival film will be showcased in Doordarshan’s programme – Indian Classics.

The story profusely depicts the life of ethnic Kinnaur, one of the border districts of Himachal Pradesh and highlights resistance by the new tribal generation against primitive tradition of forced marriage observed by the tribes of Kinnaur down the ages.

The story was selected by Delhi Doordarshan Kendra from a literary collection by the author ‘Darosh Aur Anya Kahaniyan‘, which has received critical acclaim in the literary journal and circles.

Harnot was bestowed with the International Indu Sharma Katha Samman in London by Katha UK– a world famous Asian Writers Association in the year 2003. He has a number of other awards as well to his credit, mentionable among them being Himachal Academy Award in the year 2007 for his distinguished contribution in art of story telling, imbued with pastoral sensibility of rural populace.

The enactment of the screen play has been performed by theatre actors like Praveen Chandla, Parmesh, Vandana Thakur, Rakesh, Dr. Kimara, Shashi and Krishna.