Dalhousie (Dec 31): Residents and tourists at the beautiful Hill station of Dalhousie were taken by surprise this morning when they found the whole town covered in a blanket of pure white snow. This being New Year’s time, revellers had thronged Dalhousie from near and far to celebrate the end of the past year and ushering in New Year in style. It has happened after a long time that it had snowed around New Year. 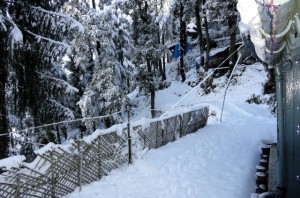 Every nook and corner of the town wore a very serene, spellbinding look with all the trees of Oak and Deodar covered in silvery white snow. The power cables and communication lines had also gained diameter as they became snow covered.

For many tourists this was a very new sight as they had experienced snow for the first time.

The snow has brought cheers to the faces of the hoteliers and other businessmen associated with the tourism industry as this would attract more tourists during the New Year weekend. With only two days left for canvassing for the elections to the Dalhousie Municipal Council which are scheduled to take place on 3rd Jan 2011, the snow might hamper the movement of the contesting candidates and their supporters but in no way would dampen their spirits.