India, which accounts for 2.4% of the world land area, is already supporting around 17% of the world population, a huge strain on the limited natural resources & a great challenge for sustainable and equitable development. However, according to the latest National Health Profile 2009 released by the Central Bureau of Health Intelligence, Government of India in February 2010, the demographic indicators have shown certain positive trends for India. The birth rate declined from 26.8 in 1998 to 22.8 in 2008, while the death rate declined from 9.0 to 7.4 per 1,000 population over the same period. Infant Mortality Rate has declined considerably (72 in 1998) during the last decade and reached 53 per 1000 live births in 2008. The population, however, continues to grow.

This article makes an attempt made to comparatively analyse the demographic 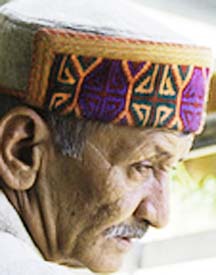 trends in the northern states of Punjab, Haryana, Himachal Pradesh and Jammu & Kashmir. The population composition is showing increasing signs of ageing. The percentage of population in the age group 60 years and above to total population (year 2007) shows that Himachal Pradesh has the second highest percentage (9.5%) among all the states in India after Kerala (11.1%). The figures for Punjab (8.8%), Jammu & Kashmir (7.2%) and Haryana (6.6%) show that these northern states are lagging far behind. Currently, families care for most Indian elders. Only a small section is covered by institutional support. An imminent rise in the number of the aged calls for institutional measures for old -age security. 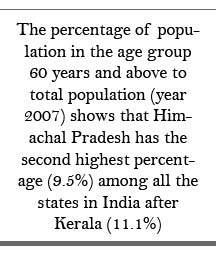 The couple protection rates (CPR) showing the percentage of couples using contraceptives indicates that Himachal Pradesh with the CPR at 72.6% has the highest acceptance of family planning methods among all the States in India. In Kerala CPR is 68.6%. The CPR in Punjab is 63.3 %, Haryana is 63.4% and in J & K is 52.6%.

In Himachal Pradesh 45.4 % of children are breastfed within one hour of birth while in J &K it is 31.6. But in Punjab it is only 12.7 and in Haryana it is 22.1%. Among these states Himachal Pradesh (76.5%) has the highest literacy rate as per 2001 Census followed by Punjab (69.7%), Haryana (67.9%) and J & K (55.5%). The comparative analysis of the demographic indicators reveals that the worst performer amongst northern states is Haryana despite having the highest per capita Net State Domestic Product (Rs. 58531 in 2007) among these states. The per capita Net State Domestic Product in Punjab is Rs. 44923. Himachal Pradesh (Rs. 40134) is fast catching up. However J&K (Rs. 24214) is far behind. All over India the best demographic performer is Kerala, which has per capita Net State Domestic Product of only Rs. 41814.

According to the United Nations Fund for Population Activities (UNFPA), globally, around 80 per cent of maternal deaths are due to obstetric complications. Almost all cases of maternal mortality are preventable. An estimated 74 per cent of maternal deaths could be averted if all women had access to the interventions for preventing or treating pregnancy and birth complications, in particular emergency obstetric care. In recent years, there has been increased recognition that reducing maternal mortality is not just an issue of development, but also an issue of human rights.

India’s maternal mortality ratio is unacceptably high at 303 per 100,000 live births (2005). A significant proportion of women also suffer from obstetric morbidities. Several studies highlight the widespread prevalence of sexually transmitted and reproductive tract infections. In a nation-wide community-based study, prevalence was nearly 6% in the 15-50 years age group. The problem is further compounded by the prevailing culture of silence, as women are generally reluctant to seek medical treatment for these symptoms.
According to the 3rd National Family Health Survey (NFHS-3) the small family norm is widely accepted (the wanted Fertility rate for India as a whole is 1.9) and the general awareness of contraception is almost universal (98% among women and 98.6% among men). Contraceptive use is generally rising. However, there is a high unmet need for family planning at 12.8% for India. The unmet need for family planning is an important indicator for assessing potential demand for family planning. The unmet need for family planning in Himachal Pradesh is 7.2%, Punjab 7.3%, Haryana 8.3% and J & K 14.5.

The Census evidence points towards a strict cultural preference for male children. Not only has the child sex ratio in the age group 0-6 years declined from 945 to 927 (Census 2001) within a decade at the national level, but also masculinity of the child sex ratios are more intense in particular regions. The sharpest decline in the sex ratio of the 0-6 year group was found in Haryana (820/1000) and Punjab (793/1000). Undoubtedly, the principal problem of declining child sex ratios is in the northern-western region of India.
This deviant pattern is explained in terms of female infanticide, and sex-selective abortion (female foeticide) as well as female child neglect.  Needless to say, son preference has existed for centuries in India. It is the easy access to sex detection technology and misuse of modern technology through sex selective abortions that has made it possible to actualize it.
With the changing social norms towards smaller family size, the availability and access to new technologies provides an easy way for parents to realise their desired sex composition of children; at least one (if not both) children have to be a son. Prof Amartya Sen describes this particular situation as `technological revolution of a reactionary kind’.

In states like Punjab, this phenomenon has gone a step further where couples do not want a second child, if the first is a son. According to studies, the sex of the previous child often exerts a greater influence on whether the family will tolerate a daughter or not, as compared to other factors. A second daughter is less tolerated than the first and chances of having a third daughter are further reduced.

As far as the estimate of missing women is concerned, the basic handicap is the absence of any reliable estimate of induced abortions. In fact, induced abortions may not always be sex-selective. In the event of women’s limited contraceptive choices, induced abortion may also be serving the contraceptive role of eliminating unwanted and ill-timed pregnancies. The skewed sex ratios and female deficit, combined with the traditional low status of Indian women, is beginning to have an effect on the marriage patterns as cultural practices such as polyandry and exchange marriages reappear in some states. There are reports that in rural Punjab and Haryana, polyandrous unions are occurring where one woman, often ‘purchased’ from poorer regions or from lower castes, is forced to be ‘wife’ not only to her husband, but also to his brothers. Further, the poorest men may not be able to marry, creating potential social unrest and increasing sexual violence against women.

To tackle this problem there is need for strict implementation of PCPNDT (Pre-Conception and Pre-Natal Diagnostic Techniques) Act. If there are violations, cases need to be filed expeditiously and convictions need to be publicized for their deterrent effect. The multi-religious approach involving faith based organisation (FBOs) as one subset of NGOs is required to tackle this problem.