Mandi (Dec 1): Resentment has been building up among thousands of residents of 15 villages in Sundernagar sub-division of Mandi district against Harish Cement Company, which is setting up a cement plant near Sundernagar, as the company has allegedly been trying to stop construction of the much-awaited 3.7-km-long BBMB Colony–Sushan–Jawala road on the pleas that it was crossing though mining area of cement project. 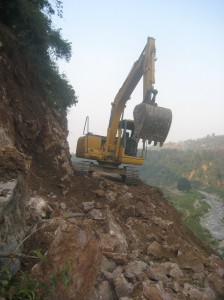 A view of BBMB Colony-Jawala road, which is being opposed by Harish Cement Ltd. Photo: Mahesh Chander Sharma

Jaidevi, Jawala, Sushan Nagbagh, Mahili, Kayargi and many other villages have been waiting for construction of this road, which would ultimately connect these villages with Sundernagar though a shortcut. The road distance of Karsog would also lower down by about 12 km through this road. According to residents, thousands of villagers are forced to go on foot to Sundernagar daily in absence of this road.

In 1991 IPH minister Dile Ram had initiated the move to construct this road, which got environment clearance in the year 2002. Now the PWD has already spent around Rs 1.15 crore on the road and more than 60% of the work has been completed so far. According to residents, they had given their land for construction of the road. Workers who have been engaged on the spot confirmed that the officers of the cement company visited the site twice and asked them to stop work.

PWD officials confirmed that they received a letter dated 20-11-10 addressed to xen, PWD, Sundernagar from the joint executive president of Harish Cement Ltd, J.S Kalra, who has asked to stop the work of the road as it was falling in the mining zone. According to BK Babu, DFO Sundernagar, since this road has been duly approved by Ministry of Environment and Forest in the year 2002, the department would not issue any instruction to stop construction of the road. He further confirmed that no final forest clearance has been granted to the cement project so far.

According to PWD xen Shyam Lal, a letter was received from Harish Cement Ltd and further added that he has convened a meeting of officials on the spot to take appropriate action. The representatives of different social organization have criticized to move of Harish Cement Ltd and said that they have been saying from the very beginning that setting up of a cement plant would be against the development of people of Sundernagar. According to Dharam Singh Prashar, Chuni Lal Sharma, Diwan Kaundal (representative of Kishan Kalyan Samiti), and Amar Singh Raghwa, president of Sundernagar Sangarsh Samiti, they would not allow to stop construction of the road, which the residents of this area have been awaiting since Independence. They further warned the officials of dire consequences if the construction of road was stopped. They further warned the administration now to allow the company officials to visit the spot.