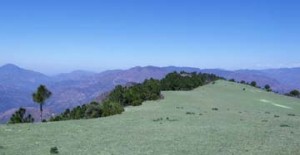 unnoticed this year, except for the usual politics of holding the annual event there and of course ranting over mismanagement of the event by the government. Once dreaming of hosting paragliding world cup, the place today is at the mercy of individual flyers trying that once-in-a-life cross-country across the Kangra valley. So while officialdom and lack of initiative may have nearly ruined the prospects of Bir-Billing as a world-class paragliding place, hope is sprouting in another corner of Himachal, though yet again not in the official quarters.

If the enthusiasm of a group of youths takes wing on time, Sherjagas in Rajgarh sub-division may soon host a paragliding flying festival and joy-ride week, sometime early next year, which would be the first such event in this part of Himachal. While the site was discovered by two professional paragliders about three years ago, nothing much has progressed after that except for few other paragliders too trying their luck over the rolling hills. The Himachal Pradesh Tourism Development Corporation was quick to approve the site but it has hardly helped to promote the place.

“There is hardly any tourist activity in this part of the state, thus depriving the people here of the share in the tourism economy of the state. We plan to popularise the place considering that it has a great potential to be developed as a paragliding take off and landing site,” said Pankaj Sood of Dynamic India Yuva Mandal, who has come up with the idea of holding a paragliding event here.

Though not ideal for cross-country flying, the site has one major advantage of having 340 by 70 m take off and landing site without any vegetation, unlike other sites in the state. Pankaj claims to have convinced some of the top flyers to test the sky over the Rajgarh valley. The event, he says, would be held in February next year. What is now required is government support and maybe monetary support from corporates in the area to promote tourism.