Shimla (Nov 19): In a unique attempt to give a glimpse of lives of persons with disabilities, a 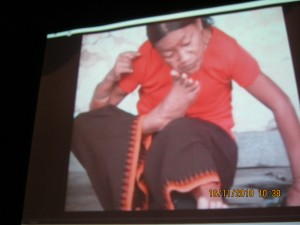 four-day disability film festival, “We Care’ film fest on disability” was held at the Gaiety theatre in Shimla from November 14 to November 17 by Umang foundation in association with Delhi-based Brotherhood Organization. The other partners of the film festival were UN Information Centre for India and Bhutan, UNESCO and National Trust for the Welfare of Persons with Autism, Cerebral Palsy, etc. As many as 19 films showcasing success stories of persons with disabilities were screened at the festival with was inaugurated by Major General CM Sharma, chairman, Himachal Pradesh State Public Service Commission on November 14 to mark the Children’s Day.

The special film festival received a good response as around 3,000 persons including 2,500 from different schools of Shimla came to watch films. “We thought to celebrate Children’s Day in a different manner. On the opening day of the festival, we had about 300 very special guests as spectators. They were the children with hearing disabilities and children living in different orphanages of Shimla. The deaf children performed Bhangra on fast music and children with intellectual disabilities did a beautiful dance – ‘I Love My India’. They watched the short films on disabilities and served with delicious lunch, chocolates and ice cream,” said Ajai Srivastava, chairman, Umang Foundation.

The response of the children and teachers was very positive. Some students and teachers of schools of Shimla raised a demand that such films should be showcased in schools to create awareness about disability. The films showcasing rights-based issues sent out a message that disability is nothing, but ignorance of ability. The films at the festival brought to surface issues like how different individuals suffering from disabilities that of cerebral palsy, blindness, and different physical and mental disabilities have overcome the hurdles through sheer determination.

Some of the films like ‘Saksham Lok’ gave an exposition of the view that self-reliance is the best assistance a challenged individual can have. ‘Dark’, outlined that the strength of a blind person lies in the ability of seeing in darkness. In a situation of a power cut he comfortably looks for a candle and lights it for others who have vision. ‘Sparsh’ outlined that parents, teachers and siblings of a child with disability tend to be so over protective of the child that they create an invisible barrier around them. This social isolation coupled with over expectation can crush the child. ‘I live like you’ was about Isheihanbi, a severely disabled girl who hardly speaks normally and leads extra ordinarily difficult life. She earns her living by doing embroidery work through her feet. ‘Waiting for You’ showed Sunder suffering from cerebral palsy working in a foundry, making utensils with his feet.

General secretary of Umang Foundation Yashwant Rai said, “It is for the first time that such a disability oriented film festival is being organized in Himachal. The films were shown to students of different schools and people of Shimla with a view to mainstream disability issues.” The festival aimed at bringing attitudinal and behavioural changes on approaches of disabilities and remove misconceptions and prejudices related to disability, he added.

Director of Brotherhood Organisation, Satish Kapoor said, “We care festival is being organized since 2003, in association with UN Information Centre for India and Bhutan, UNESCO, National Trust, Asian Academy of Film and Television (AAFT) and many other organizations to create awareness about disability issues through the medium of films. It is aimed to highlight the rights-based approach where persons with disability are considered persons not burden. The experience of Shimla a unique for us as Umang Foundation focused on the students of schools and response was excellent.”

Minister of Social Justice and Empowerment, Himachal Pradesh, Sarveen Chaudhary who concluded the four day event lauded efforts of Umang foundation for being proactive in field of disability, blood donation and its work for Thalassemic children. She said that, “Such festivals were a potent medium to sensitize the audiences and create awareness on issues related to disability.” This film festival on disability would prove to be a mile stone in strengthening the disability rights movement in Himachal Pradesh.