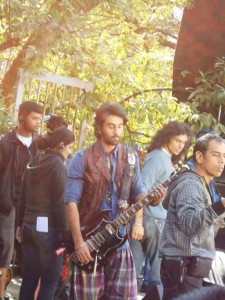 Dharamsala: Film actor  Ranbir Kapoor , who was in Dharamsala today, impressed Tibetan &  Himachali youth while shooting for his upcoming movie “Rockstar”. One scene from his film was shot today at “Norbulingka monastery” where he arrived early in the morning & shot till 5 p.m. It was amazing to see hundreds of Tibetan youth & Buddhists monks lined up & gathered for hours just to catch a glimpse of this superstar.

The film “Rockstar”, directed my Imtiyaz Ali, is about the life of a rock artists named “Jordan ” (Ranbir kapoor) the leading lady in the film is Nargis Fakhri, a half Pakistani & half Czech model, who will make her debut through this film. Talking to HimVani while signing autographs for kids she said she has already started feeling like a star as she is making her debut alongside such a big heartthrob. 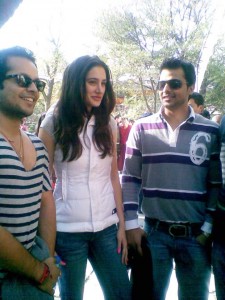 Today’s shoot at the monastery included a song called “Saada haq itthe rakh” featuring Ranbir. It was surprising to see Tibetan youths dancing to the tunes of this song. The film crew was so impressed by this that they included the Tibetan youths in this song & even allowed them carry Tibetan flags & banners about freedom, free Tibet, etc. The youth found an opportunity in this to showcase themselves & their cause through a bollywood flick.

As shooting came to an end, hundreds of people, mostly girls, rushed towards Ranbir for autographs, but most of them were disappointed as he was hurriedly carried out of the shooting venue with the help of bouncers & police so as to save him from such huge crowd. Tomorrow’s shoot will be at Dharamsala airport near Gaggal.