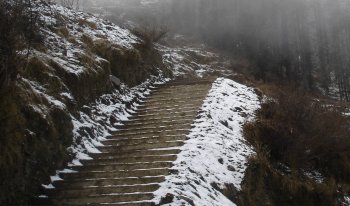 It was the perfect Christmas vacation I could hope for- one outlined in all Christmas cards – Snow covered paths and falling snow flakes. What made it even more beautiful was the fact that it was the first time in my life that I was seeing this pretty picture.

We set out on the journey from Delhi. Six intrepid travellers, lot of snacking stuff, backpacks stuffed with woollens, and a suede Innova equipped with an LCD screen. We started at around 1:30 in the night – apt enough considering that most of our parties in campus used to be at their full bloom at this time. However, after some movie watching, the lulling motion put most of us to sleep. (Actually, with the way our driver was going, it was more a jerking roller coaster rather than a lull, but we still managed to get snoring!)
In the morning, one of these jerks brought me out of sleep, at the most perfect moment that you can find in the mountains – the sunrise. A streak of orange appeared from behind the mountains and lined the sky. I rolled down the glass to feel the fresh chilly wind on my face. Nothing beats the mountains. Even after you have seen them and felt them a thousand times.

Suddenly, our driver who was bored of driving switched on the blaring music and jolted everyone out of their slumber. After that the journey continued with some life, till in a few hours, we reached Naldhera – a very small town (if we can call 10 houses a town) boasting of a nice golf course. We had booked a log hut for our stay and it was a very comfortable hut. After a hearty breakfast, we set out for a small walk along the road. The road, as all roads in the hills, outlined a pretty valley, looking out to another set of hills on the other side.

Later during the day, we went to a hot water spring 30 km from Naldhera – called Tattapani. Though the place was not particularly interesting, the drive to the place was absolutely beautiful. We drove for a long while on thin roads cut through tall mountains, and then drove on a winding road along the Sutlej. Right before we reached Tattapani, there was a bridge which offered a fabulous view of the stark blue river, narrowed with guarding tall brown mountains on either side.

The next day, we set off to Fagu – a small village 4 km away from Kufri. This very quiet and relatively unknown place offers a stark contrast to its neighbour Shimla, which has become a bustling town accomodating several truckloads of tourists. The HPTDC guest house (Peach Blossom) where we stayed, was perched right at the edge, providing a beautiful view of the snow capped peaks across the valley. We were a little disappointed with the lack of fallen snow as the last snowfall had taken place almost 15 days ago, and the entire place offered was some random patches of snow scattered around the place. So it seemed that all our snow dreams were shelved for this trip. However, a good hike was enough to draw us out of the disappointment, and as we set out for a climb nearby, the snow patches grew bigger, so much so that we found enough scope for snow ball fights and snow architectures. We began to construct a Calvin house of horrors, and mid way changed design to a snow castle, which soon became a UFO landing ground, and no sooner – a sight for destruction.

In the evening, we decided to celebrate Christmas and so went to Shimla for the festive air and some coffee. We headed straight for the Mall road – the sight of Barista in cold hills was welcome and refreshing, though the whole road seemed packed with tourists. We had a nice evening, and then retreated back into the comfort of our resort by 11.

We were quite satisfied with the trip till then and were planning to go to Narkanda for a better view of snow peaks the next day. But Santa decided to give us a Christmas present, albeit a day late and showered Fagu with snow the next morning. Soon after we got up, we began to see small flakes lining up across the window pane. The flakes were hardly discernible – but soon they became bigger, and as we rushed outside to capture our almost first snowfalls, they began pouring! It was a site I will hardly ever forget. I have dreamed often to see a brown ground smeared and immersed beneath a sheet of snow – and here it was. Happening right in front of me.

We played in the snow, walked in the snow – slid on ice sheets, stared at the chaos of vehicles trying to drive through snow-laden roads. With chattering teeth, we refused to get inside and let any moment of the picture pass us by. It was beautiful. In that small, almost unknown village of Fagu, we experienced heaven.

And then, we came back – to the city of Mumbai. To resume a normal earthly life!

Courtesy: The sun, the sea, the sand, the road .