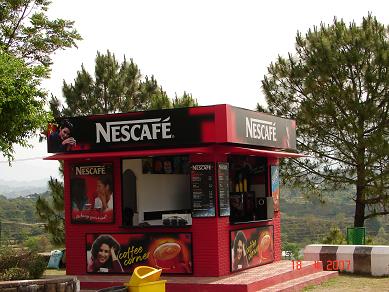 Two Nescafe kiosks have come at strategic points at the National Institute of Technology, Hamirpur – one near the Manimahesh Boys’ Hostel, where it caters to the cravings of the big boys of the Institute; and the other at the entrance to the main Administrative Block where most of the students have their classes as well. This I find to be a very strategic position.

As I watched the bright red coloured Nescafe kiosk inviting us to have the Cup-that-Cheers, I was reminded of good old days when we used to sit on a wooden bench, with shaky three legs and some bricks making up for the missing fourth leg, under a tree at a place that now leads to the Computer Department. It was a tin shed, Chai-ka-dhaba, where the groups of students and teachers would sit and discuss many a matters, over endless cups of tea!

No, it didn’t have cups – porcelain cups, neither it had the fine disposable use-and-throw cups – it had glasses of the cheapest possible range. The tea would be made in front of our eyes on a kerosene stove and no one would ever murmur about the smell of the kerosene! No one would ever comment upon the water quality or the unhygienic condition of the dhaba. We saw the tea being boiled in front of out eyes and the aroma of the boiling tea leaves would fill our nostrils with a craving for more, though we had not heard of the super-duper slogan “Yeh Dil Maange More!” at that time. These days, the tea makes its special appearance from the mechanical machines and the process of its making remains hidden in the maze of the machines itself. Perhaps some super brains of the Royal Mechanical branch might unravel the mystery to me during one of the class seminars where I listen to them in admiration, open mouthed, when they talk of such marvels of science.

Now who would think of an innovative idea gulping down a cup of tea, whose very origin is questionable to an old fashioned person like me. On the other hand the brewing of the tea in an aluminium kettle on a kerosene stove would open the channels of the brain of the person having it. Many a discussions, heated and deadly battle plans were thought of, sitting under the tree that provided shed to the three legged bench. I am really missing the bench. This bench was the most comfortable place to sit and have tea. These days the most comfortable ergonomically designed chairs in the canteen are not able to provide that comfort level, or is it that our old bones prick our very being these days! But then we have come a long way and have many a things that make us vie for top in the field of Technical Education and the Nescafe kiosk is one of them! The old dhaba was sacrificed as it looked as a blot to the beautiful tech savvy campus. Whereas, the Nescafe kiosk is like a beauty spot adding to the mystifying techno-savvy kingdom!