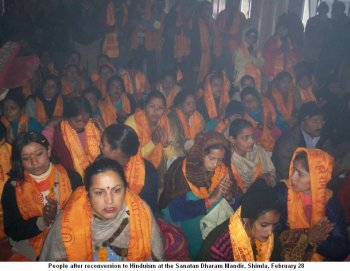 Shimla: It was a moment of pride for all those who believe in the basic values of Indian culture and fundamental rights when 151 men, women and children were given an opportunity to return to their original faith. They all belong to Scheduled Castes with fragile economic condition and were converted in to Christianity by allurements during past several decades. When their struggle to achieve equal social and economic status within the Christian community failed to yield results and they were just thrown away like used commodity, they realised the folly.

All India Scheduled Caste and Scheduled Tribe Mahasangh, HP, in the vibrant leadership of its president Tarsem Bharti, showed them the path to return to Hinduism again. Braving heavy snowfall in all around Shimla on February 28, 2007, hundreds of people of all castes and faiths gathered at Sanatan Dharam Mandir to welcome their alienated brothers and sisters. 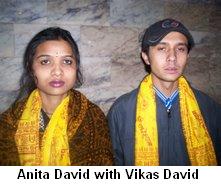 There were Sikhs, Jains, Buddhists, Valmikis and Ravidasis apart from other Hindus to greet them. The persons who returned back to Hinduism included one senior Pastor Tulku Ram, one old and hapless widow Lajja Devi, two young sisters Sanam Samta and Safar Samta, two brothers Ashok and Kishore and one couple Vikas David and Anita David along with their families. Everybody had his or her own story of deception and cheating by those who once came to them as saviour in white cloak. 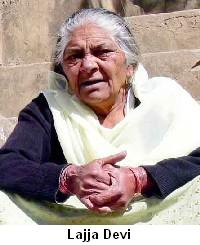 Dalit widow Lajja Devi (62), a resident of Kasumpati area in Shimla, while talking to HimVani, narrated her pathetic tale. She said, “I not only lost my young grandson Rakesh (28) but also my faith. The Pastor assured me that my beloved grandson, who was a serious patient of brain tumour, will be cured, provided we all bring belief in Jesus Christ. As he was the only earning member in my family of 15 and we had no reason to disbelieve the Pastor, we all got converted to Christianity. The Pastor also mislead us and threw the sacred Ganga Jal in the toilet and the idols and pictures of Gods and Goddesses were thrown in nearby nalla. But after a couple of days, Rakesh died.”

That was not the end of her story. She revealed, “After the death of Rakesh, the Pastor demanded Rs 2,000 from me to arrange for his burial and did not hesitate to demand Rs 5,000 for making a magnificent grave so that the soul of my grandson could rest in peace. I know how I managed this big amount to give them after losing my beloved. Now three and half years have passed, leave aside a magnificent grave, even a pucca grave has not taken shape. Having ruined me, the Pastor left me to my fate. I am feeling relieved after coming back home (Hinduism).”

While talking to HimVani, the former senior Pastor Tulku Ram became very emotional. He said, “I was literally cheated. In 1997, while I was doing my graduation, they (missionaries) contacted me and assured me a good job, provided I got converted. But after conversion, they sent me to Agape Bible College, Ludhiana, for one year training and then to G.F.A. College, Kumbnad (Kerala) for further one year training. I had little options at that time because of my fragile economic condition. Having appointed as Pastor, I started converting poor people, mostly ailing, by giving them assurance that they will be cured by bringing faith in Jesus and prayers.” He also revealed that his outfit ‘Masihi Sangati’ belonging to the Protestants had converted more than 1,000 people in Himachal Pradesh.

Tulku Ram said, “I spent nearly 10 years in Christianity and eight years as pastor, but my conscience never allowed me for that fake healing, although I converted about 50 people myself. I very well knew that nobody could be cured by that way and the Pope John Paul, who was suffering from Parkinson, was a great example before me. Now I was fed up with all these frauds and was ready to return to the fold of the faith to which my forefathers belong, when Mr. Bharti, (President of All India Scheduled Caste and Scheduled Tribes Mahasangh, HP) contacted me.”

Replying to a pointed question, he said, “This was no religion but business. They used hapless people like me as tool to collect a gathering and would take snaps of them. By sending those photographs to their mentors abroad, they would fetch a lot of money to spend for the welfare of neo-converts. But the fact is that they never spent that money on the purpose.”

The tales of two brothers, Kishore (46) and Ashok (49) and two young sisters Sanam and Safar Samta are not much different from the story of the former Pastor. They were allured to convert by fake healers. In 1988 Kishore and Ashok got converted along with other members of the family by one Sister Sony who assured them that their younger sister Indu, who was suffering from stomach ulcer would get cured by prayers. Now 19 long years have passed, the patient is still suffering. Ashok also confirmed that after conversion, they did not get equal social status and had to face discrimination at many times, even within the Christian community. 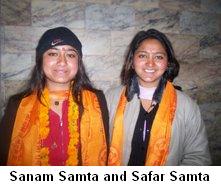 Same thing occurred with the family of Sanam and Safar. Their grandmother was seriously ill and the fake healers in white cloak took advantage of that and got the whole family converted. The condition of that old lady did not improve by prayers in the Church. One Deepak was lured for free education to her daughter and one Chandan Pal was assured a job. But the promises were not kept. Now they all, after coming to their original home, are feeling good. 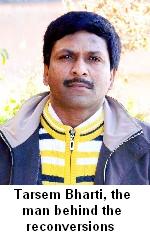 The programme, first of its kind in the history of this hill state, was organised under the aegis of All India SC and ST Mahasangh; HP and its president Tarsem Bharti played a key role in bringing them all to their original home. He said, “It is a question of human rights because they were basically cheated and left at the mercy of those who are known for their crafty designs.”

Mahant Surya Nathji and Swami Lalji Maharaj along with Sriniwas Murti, the Prant Pracharak of RSS and others washed the feet of all 150 persons, with their hands. After havan and shuddhi, all were presented with pictures of Hindu Gods and Goddesses, apart from religious books and Ganga Jal. Earlier to this, they all were brought to Sanatan Dharam Mandir in a Shobha Yatra. Vishwa Hindu Parishad, Sanatan Dharam Sabha, Sri Guru Singh Sabha, Sewa Bharti and other religious and nationalist organisations supported the cause. 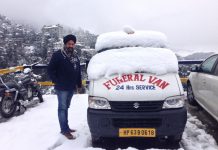 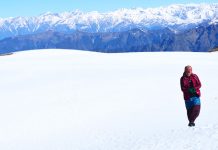 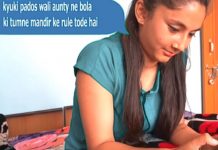