HimVani Celebrating Life in the Mountains
Home Travel & Tourism Chandertal: The lake of the moon 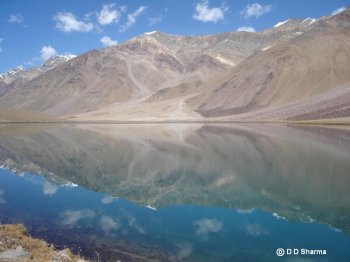 Chandertal is one of the natural high altitude lakes situated in the cold desert of Himachal Pradesh – at an height of 4,300 metres above the mean sea level. This wetland had been identified as a wetland of national importance due to presence of rare plants, variety of animal species and its role in the maintenance of eco biodiversity of the region. It is believed that the lake is known as Chandertal (the lake of the Moon) because of its crescent shape. This lake pours some of its water in to the river Chandra, and lies between low ridge and the main Kunzam range.

Surrounded by snow and high mountains, this deep blue water lake has a great tourism potential. Lot of scientists and foreign tourists visit Chandertal every year. The best time to visit this place is between July and September. The panoramic beauty of this region has no match and for the real insight of the wetland, one should travel on foot. According to Hindu mythology, this is the spot where Lord Indra’s chariot took the eldest Panadva brother, Yudhishthra to heaven in his mortal form. Chandertal wetland is a natural habitat of some rare species of flora and fauna of alpine region and is a main source of water for there sustenance.

Due to oxygen deficiency, low pressure, extreme cold conditions and radiation effects in this area are high and only hardy species can survive.

The lake water plays an important role in neutralising the effects of these adverse climatic conditions and helps in keeping the underground water intact.

The Lake can be approached by bus up to a place called Batal, which is 120 km from Manali on Manali-Kaza State Highway No 30, and from there on the next 14.5 km can be covered on foot or by light vehicle, i.e gypsy etc. Alternatively, one can reach Chandertal on foot via Kunzam la (8 km). The road to this place is not up to the standard due to heavy snowfall every year. As a matter of fact, it takes about four hours from Gramphu to Chandertal. Secondly, there are no boarding and lodging facilities on the way. There is one HP PWD Rest House at Chota Dhara about 30 km from the lake on Manali-Kaza Road. Prior boarding and lodging arrangement is recommended.

Total area of wetland is about 1.53 sq km. The circumference of the Chandertal is about 2.5 kms. The lake is situated in the foothill of the main Kunzam range, which further joins the great Himalayan and Pir Panjal ranges.The wetland remains under snow cover for most of the time . During winters, the mercury dips down to as low as -40° C.

The lake has been formed due to blockades of rock basin by scree and para glacial deposits and the glaciers are the main source inflow. There is also a regular outflow of water that keeps on varying depending upon the season.
Chandertal is of special value for maintaining the genetic and ecological diversity of the region.

The clean water of the lake with small marshy patches around, attracts many migratory birds. A large variety of migratory birds visit this wetland during their trans-Himalayan migration and some of them also use these marshes for breeding during summers.

The wetland has scanty vegetation. The whole area receives heavy snowfall during winter season and the glaciers start melting in April and May leading to deposition of silt in the lake. The migratory glaziers use surrounding area of the lake as camping ground. The combined effect of the visitors and glaziers contribute to increased siltation and organic influx in to lake.

In view of the special value of the Chandertal, prevalent plant and animal communities and for maintenance of the biological diversities of this region, special measures are being taken. The efforts are also made to keep the surrounding environment clean. For this purpose, a special work plan has been prepared with provisions for soil conservation works and public awareness programme.