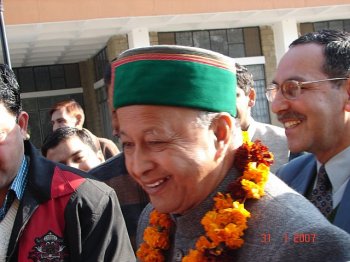 HAMIRPUR: The Chief Minister Virbhadra Singh’s visit to National Institute of Technology (NIT), Hamirpur on the morning of January 31, 2007 revived pleasant memories of the past when on August 8, 1986 he had laid down the stone of a new era in the history of Himachal – a knowledge state in the making.

For future expansion of the institute, we need to have more land and this has been assured to us by the Chief Minister. About 306 kanals of government land adjacent to our boundary would be provided to us. The direction in this regard has been given to the DC by the Chief Minister. The sanctioning of Rs 49 lakh, the amount which was pending since the time of Regional Engineering College (REC), to the NIT Hamirpur is another favour that the CM’s visit has given us. We hope to have a new boundary for us when the present PWD road would be covered under our area and the new road would become functional for public transport. We hope that this is the journey and it would go on to usher Himachal as a knowledge state in the country.

The new administrative block, fully automated with Wireless LAN technology, built at the cost of around Rs 63 lakh would streamline the functioning of the work and would usher us in the world where Technology is not only taught but is implemented as well.

The seed of excellence in technical education was sown on January 31, some 20 years back and today while the new Administrative Block was inaugurated, a milestone in the direction of e-governance was achieved. 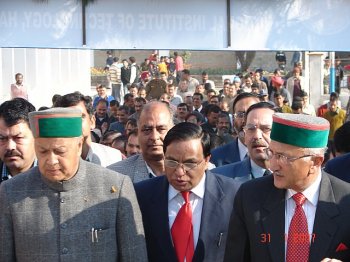 Singh seemed happy to see the positive changes in the Institute. We, the old timers, who had seen the inauguration of the College twenty years ago, could feel his happiness and satisfaction. Dr R L Chauhan, the Chairman, Board of Governors, Prof I K Bhat, the Director have been instrumental in fulfilling a long pending dream of a fully automated administrative office.

The library of any educational institute serves as its nerve center and expansion of the infrastructure remains a top priority for any right thinking educational institute. NIT that started as REC in the year 1986 had a small library housed in the Govt Polytechnic building where we would sit reading books and journals. It has been a-dream-come true for all the old timers like us who thought of a library replenished with all modern facilities. Advancing further in the direction for expansion, a foundation stone was laid by the CM for a four-storied library building that would be built at the cost of Rs 8.83 crore. The best of the modern infrastructure and the judicious collection and acquisition of books would go a long way to make our library as a most sought after library in the region.