By: Saroj Thakur
January 25, 1971, the historic day when the hilly state Himachal got Statehood, still makes its presence felt in my memory lanes. I was in class tenth and honestly speaking had little knowledge about the status of our state. So when the elders at home would discuss animatedly about the ensuing historic moment, it would not register much to us children. But we were very excited about the visit of Smt. Indira Gandhi, the then Prime Minister of India to Shimla and were making plans to have a close look at her.Those were the days when only very significant functions would be held on the Ridge and it wore a festive look for that function. It was not like the days that anyone who was something would be allowed to conduct a function on the Ridge. 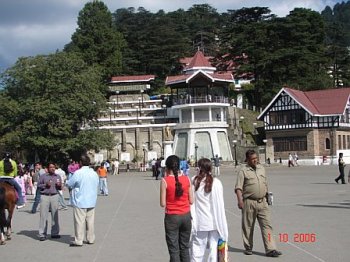 As we lived near to the Mall and as the Ridge used to be a place to assemble for all the neighborhood kids, we would minutely discuss the new changes being incorporated on the Ridge. The erected podium behind the Gandhi statue got its present shape and design for that historic moment. Whole of the area, the stairs and the small flower beds near to the podium got a facelift much to our enjoyment. We would go in the evening and touch the water cascading down the shells used on the wall and the seven colors that would enmate from those shell. The Gandhi statue, too, got a face lift and if my memory serves me right it got a new pain as well; though we liked the earlier one. Everything was given a facelift.

On the appointed day we all children dressed in our best clothes and were ready to go to the ridge. I remember that it started snowing and the weather was very cold. But the large number of people from far off places had assembled on the ridge to witness the award of statehood on Himachal. Little did we realize at that time the importance of witnessing a historic moment. We were mesmerized by Indira Gandhi who looked stunning in black colored overcoat that she had donned. I can still recollect her, wearing black coat when snow flakes were in the air and were setting on her hair and coat, addressing the people of Himachal. She looked magnificent and so did Dr. Y. S. Parmar the then Chief Minister of Himachal Pradesh. People were jubilant and so were we watching everyone so happy. We knew that something great has taken place and now we would be a full fledged state. The ceremony was impressive though simple appropriate with the simplicity of the people of Himachal.