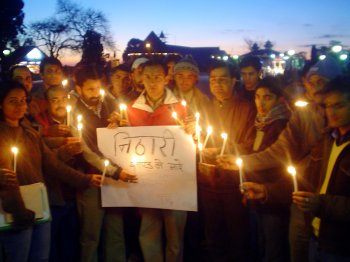 A local NGO – ‘The Voice’ leading a candlelight march on the Ridge, Shimla, Himachal Pradesh on Monday, January 15 to pay tribute to the children murdered in Nithari (Uttar Pradesh).

Central Bureau of Investigation on the basis of circumstantial evidence, suspects murder of about 40 children of Nithari village, near Noida, a suburb of Delhi, in the past two years by Moninder Pandher and his servant Surender Koli, alias Satish. Koli in his initial narco-analysis tests has reportedly accepted cannibalism too. Meanwhile, the role of the Noida Police too is under the scanner, who have been under heavy criticism for not doing anything and refusing to file FIRs, when parents of missing children came to the police to seek help.

The incident came into light almost a month ago, when human skulls and bones were discovered in a gutter outside Pandher’s house.