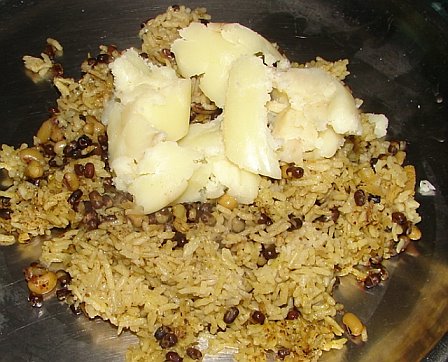 A plate full of khichri laden with ghee

Lohri day brings to my mind so many memories, each trying to take centrestage relegating others backstage! Each impression has been an eye opener for me and has made me learn so many lessons of life. Some pertain to my childhood — Steaming hot Khichri with ladles of ghee (clarified butter), having a bath early morning, the dry fruits surrounding us, the Lohri songs being sung, the heaps of chillers that we would distribute equally among us kids and the good feeling of having made some money of our own.

Khichri would be prepared with all the ceremonial importance due the occasion. The aroma of the paste of ginger, garlic, green chilies and the garam-masala would raid our nostrils in the morning, but the ritual bath early in the morning would be a compulsion and that too in the winter chill of the Shimla.

I pity the young generation today for being so careful about not taking ghee, though what I would suggest them is to work more to burn calories. Thank God I don’t have any guilt feeling taking up ladle-full of ghee even today when I am 50. I have learnt to eat well and to work well to burn all those over-eaten fats rather than neither to eat more nor to work more. Another memory from my childhood in Shimla is when we sat near the fire throughout the day, when it had snowed outside, making strings of dry fruits – neojas, almonds, walnuts, kishmish, pista and kaju etc. and would put them in our necks and relish eating them later – though would have over eaten them during the ‘string-operation’ itself, while trying to escape Ma’s very prying eyes!! Perhaps it was an ingenious way to keep us indoors when it was so cold outside.

I learnt to think of innovative methods to keep kids busy and occupied as well to give them a pleasant memory to cherish. There is another impression pertaining to the time when I had stopped seeking Lohri from all uncles and aunts as I was a growing up teenager and had become conscious of myself. That Lohri evening, I was sent on an errand to someone’s home, where the Lohri plunder was being distributed among all the kids who had gone singing Lohri songs and collecting the money given as Lohri. I was given an equal share though I had not been a party to the group having gone braving the chilly weather as well as chilly and inclement looks of some householders! I learnt to be generous while sharing the booty. There was not even a single frown on the face of the kids when they happily divided the money equally with a non-earning member of the group.

So much for the socialist pattern of thinking without even having heard a word about Karl Marx, I learnt to share all that had without a frown. Some more memories generate a different feeling, as these were very personal feelings. The day I was coming home from my college and saw in the bus so many newly married women going to their parents’ home to celebrate Lohri while I, bone-tired, from personal and professional work could not think of any such possibility. I suddenly had an urge to be with my mother and take all the comfort that her mere presence could give me. But instead went to my Ma-in-law! The feeling must have been very strong to have left this impression as today, after about 20 years, I suddenly am deluged with the same feeling and the same helplessness of not been able to go! I learnt to put duty first and my priorities last!

I wonder if the present generation kids, too, are learning some of the good things from Lohri or are they becoming so business minded that they have penned Lohri songs stressing the amount of money that they would take — or the way they come in a group having not more than two members so that the booty is not divided among more and the share is relatively more. So much for learning! Or when young and old men and women dance around Lohri fire and indulge in all kinds of hooliganism all in the name of Lohri celebration! I wonder what cultural values would they be spreading around. Perhaps I am getting old and I try to find the values that I still cherish in the world around. But perhaps all those are long lost in the present day modern society. The old order must change to pave way to the new!