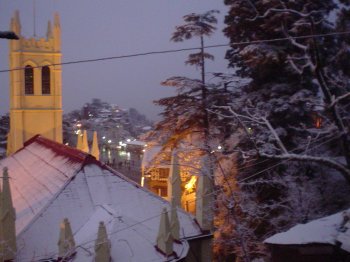 After Shimla drew a blank on snow last year the weather seems to have patched up as the town was greeted with a surprise snowfall on Monday. After experiencing a warn sunshine during the first half of the day clouds took over and the snowflakes were all around at three in the afternoon. Bringing cheers to the outstation revelers, by four O’ clock the whole town – from Dhalli to Kacchighati and Bhrarai to Summerhill – was covered under a thin blanket of snow.

Shimla experienced short and light spell of snow Sunday evening, which was visible on Jakhoo hills and roofs of the houses there till Monday morning. And as the news spread around, revelers from the neighbouring states rushed in late yester-night and early Monday morning. 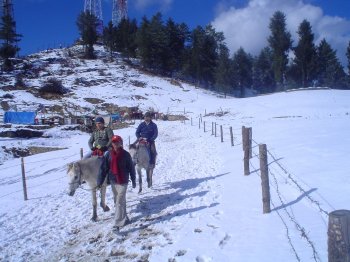 As this report was being filed at around five thirty in the evening it continued to snow heavily in Shimla. Locals as well as tourists, including newly wed couples, could be seen enjoying a stroll, as the snowflakes ushered in the holiday season here. Between three to five p.m. the in-roads of Shimla were blocked as there were tourist vehicles parked on both sides of the road.

On National Highway leading to Narkanda traffic was blocked due to snowfall at Kufri and also further up. However, this did not stop tourists from rushing to Charabra and Kufri. Later too the traffic movement towards that side was at a snail’s pace. Good spell of snowfall has also been reported from Narkanda, Fagu, Kharapatthar, Kalpa, Dalhousie, Kullu Manali.

With this the advance booking at the hotels have poured in all of a sudden and most of the hotels are likely to remain all-packed till the New Year. The government rest houses and circuit houses too are going full.

The orchadists in the region are all smiles with timely snowfall pampering their plantations. Experts say that the early snowfall would be a boon for the apple crop next season. However, College and University students seem to be the only lot who are not much pleased with the spell as they would have to brave the chill to walk up to the examination centers. Their exams would continue till mid-January.