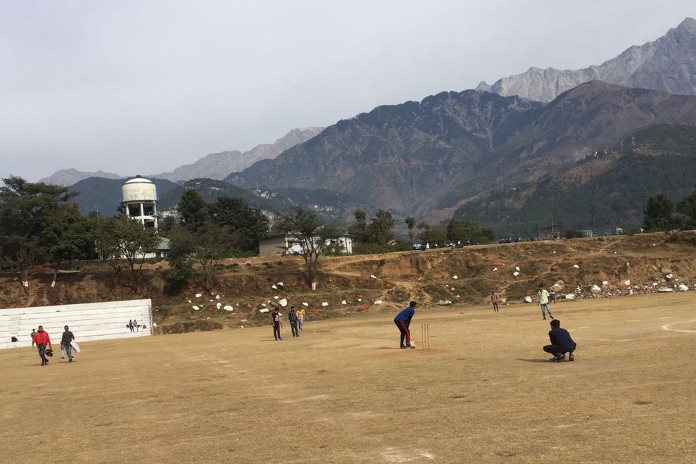 Former Himachal Pradesh Urban Development Minister, Sudhir Sharma has extended his support to the agitators who are pressing the government and the police to stop construction of IG Office in the vicinity of the Historic police ground in Dharamshala.

The police ground holds historic importance as it came up during the British rule and was made by the voluntary service of the public.

Sharma, a Congress member who lost from Dharamshala to BJP’s Kishan Kapoor in the recently concluded Assembly elections, accused the present government for throwing public sentiment to the wind. He said that the matter was brought to the government notice during the Congress regime and finding the demand justified, the Congress government had stopped the construction. “But as soon as the government changed, the BJP lead government has allowed this construction, which could have been shifted to a better place agreeable to the public and the police.”

People of Dharamshala, various organisations including Bar Association of Dharamsala, the Beopar Mandals of Kotwali and Kachehri, Jan Chetna Organisation, Singh Sabha Gurudwara, Football Association and Gorkha Association and the senior citizens have joined the protest against the construction of IG office adjoining to the police ground. The agitators met Chief Minister Jai Ram Thakur during his winter sojourn in the city but could not succeed in getting the construction work stopped.

Agitators are of the view that the Police Ground and its adjoining area is the only open space available in the town for youth to play.

Senior citizens take a stroll in the ground and often social and official programmes too are organised there.

DP Sharma one of the agitator said that the IG office could have been constructed somewhere else, but the police chose this area, as it was close to the Police Grounds. A basketball ground constructed by the Sports Department was also destroyed. Senior citizens of the town recently lit up candles in the protest at the construction site of the IG office adjoining the Police Grounds.

Vijay Kumar, a senior citizen said, “Dharamshala had been declared to be developed under the Smart City project, where the foremost requirement was to provide adequate open space, especially for children, disabled persons, senior citizens and others, to walk. It is rather pitiable that the authorities are squeezing the open space by such unplanned constructions.”

The police administration on the other hand is maintaining that it is constructing the building on its own land.

The agitators say that if all goes in vain, they may approach the court.