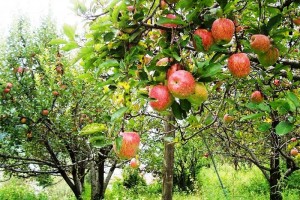 To further boost up the high-quality fruit production in this hill state Himachal Pradesh has working to start Rs 1134 Crore World Bank funded Horticulture Development Mission project which is on the anvil to launch in the future. Deputy Commissioner, Madan Chauhan who was speaking at a workshop of horticulture experts and scientists held here at the Conference Hall of the Mini-Secretariat here today said that the Horticulture Mission would extend to the entire state comprising 12 districts.

The World Bank-aided Rs 1134 crore Horticulture Development Mission has drawn up an ambitious plan to harness the tremendous potential of horticulture development on the high-tech scientific lines to get optimum benefit. The special feature of the Horticulture Mission was to involve the small and marginal fruit growers and women in the gigantic project with the view to ushering in an era of Prosperity among the ordinary fruit growers of the hill state by using high-tech methods in horticulture in the hill state.

Horticulture specialist from all parts of the state and universities participated in the workshop and shared their views with the fruit growers and stressed on intensive and scientific methods in horticulture to enhance their income. It was paramount for the fruit growers to produce different types of fruit in different parts of the state which were suitable according to the climate required for them, they advised.

According to an official survey, 18,200 hectares of land had been identified as the most suitable for the development of horticulture. In addition to this, another 8,800 hectares of land had also been identified for the production of the rare and special varieties of fruits involving scientific techniques. The fruit growers already engaged in horticulture in a scientific manner would be greatly benefited, said the experts. Experts advised fruit growers not to be panicked by spells of drought and impound rainwater and also adopt drip irrigation which had proved a boon in many parts of the world.