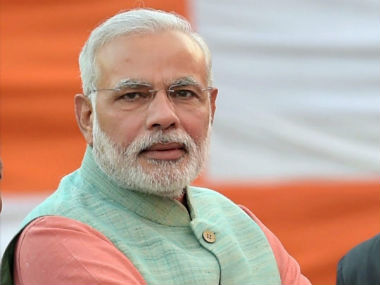 Before the stone laying ceremony, Mr. Singh presented the PM Himachali Cap, Shawl and Thank painting. The function was also attended by state Health Minister Kaul Singh Thakur, Party president Satpal Sati and Transport Minister G.S.Bali. Mr. Modi laid the foundation stone of three projects which would come out in Hamirpur Parliamentary Segment. AIIMS unit likely to be commissioned by four years to be coming up on 205-acre area at Kothipura. The institute would cost about 1351 Cr having 750 beds with 100 MBBS seats and 60 nursing students. Steel plant was built up by the Steel Authority of India under Make in India Mission since 2014 onward after spending Rs 70 Cr rupees dedicated to the public. Steel plant would manufacture TMT steel bar of one lakh tone per annum production capacity.

The IIIT would be developed in the 69-acre area at Salho in Una with the estimated cost of Rs 128 Cr. Later Mr. Modi rush to address BJP rally organised at Lahnu ground on bank Govind Sagar in Bilaspur. Mr. Modi visited poll-bound Himachal and it was his third visit to this hill state as he had addressed two Parivaratan Rally at Mandi and Shimla. The rally was considered an acid test for the Union Health Minister Mr. Jagat Prakash Nadda as Bilaspur is his assembly segment moreover foundation stone of AIIMS as his dream project. Mr. Nadda who was likely to be the chief ministerial candidate of BJP in the state was camping here for last four days to make this rally success.Mr Nadda is third strongest leader after two-time former Chief Minister Shanta Kumar and Prem Kumar Dhumal. Mr. Modi claimed this hill state close to his heart because he has remained state party in charge in 1998 before he was elevated to the Chief Minister of Gujarat. Special arrangements were made to ferry people from another side of Govinder Sagar valley to the rally ground as 60 boats have been hired to reach the rally.