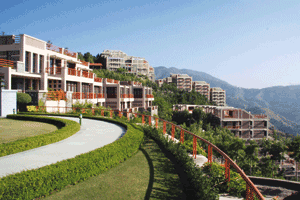 The University mess which was reported for many complaint in the past for not serving the quality and fresh food items reportedly caused the food poisoning. The leading IT university was owned by the Jaypee Group which is the UGC approved private institutions offer various engineering courses. SMS said that most of students were discharged today as their condition improved after the medication however expect five students most of them were admitted with the complaint of food poisoning of the common cause. More than 12 students were also rushed to Kandhaghat Civil Hospital.

Students were rushed to hospital at 0200 hours in the night caused the panic among the students and their parents. The District Administration acting upon the complaint of serving the toxic or stale food to the victims today took the food samples served to them as a team of Chief Medical Officer Solan R K  Daroch took the samples from the Jaypee University campus. Additional Deputy Commissioner Sandeep Negi told Himvani that university water supply scheme has been run by university itself and water samples were being taken and sent to Food Safety Labs at Kandaghat. Food samples were reportedly sent to IGMC labs to seek report for the incidents.