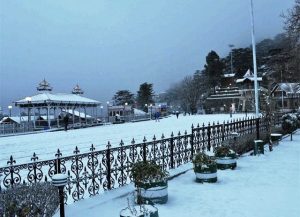 Himachal Pradesh Chief Secretary VC Pharka today convened a high level meeting to review the progress of restoration of roads, water and electricity supply in the State following the fresh snowfall with the senior officers of the concerned departments today.

He directed to work on war-footing basis for opening of all the temporarily blocked roads due to snowfall and to ensure proper supply of water and electricity. He asked to remove the snow on both the sides of the roads so that no inconvenience was caused to the general public. He said that all obstructions to the roads should be cleared on priority to ensure free flow of traffic.

The Chief Secretary said all the departments concerned with the essential services had been asked to continue deployment of additional staff for maintaining these services on priority. Additional Chief Secretary Mr. Narendra Chauhan, Special  Secretary, Revenue-Disaster Management Mr. D.D Sharma, Deputy Commissioner, Shimla Mr. Rohan Thakur, Engineer-in-Chiefs of IPH and PWD, Director (Operations) HPSEBL and other senior officers of the state government were present in the meeting.