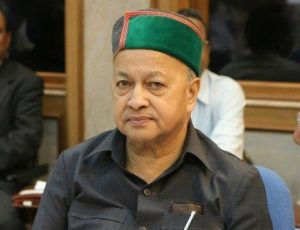 Besides many other public interest works, Himachal Pradesh Chief Minister Virbhadra Singh laid the foundation stone of new building of Government Arya Degree College at Nurpur in district Kangra on the second day of his Winter Sojourn in the lower areas of the State today. This college building is to be constructed at a cost of Rs. 20.34 crore. He also dedicated a drug rehabilitation centre at Nurpur to be run under the aegis of the District Red Cross Society.

He also inaugurated a link road from Hindora Gharat to Halti Jamwala with two bridges on Jaber Khad and Garli Khad constructed at a cost of 282.82 lakhs and an open air gym in the Municipal Park at Nurpur. Speaking on the occasion, the CM expressed happiness that more than 2300 students were enrolled in Nurpur college in different disciplines. He said that site selected for the construction of new building of the college was ideal and there was ample space available to develop a beautiful campus. CM said,”Though, this college is being built at some distance from the town but a separate road would be constructed to the college.” He directed the P.W.D. authorities to complete the college building on war-footing and announced to release the money allocated for the building in one go.

The Chief Minister said, “38 colleges were opened in the State while four private colleges were undertaken during the last four years and 1,177 posts of different categories were created in the college cadre. In the Education Department 9,538 posts of various categories were filled to provide the qualitative education. Over Rs. 213 crores were spent to distribute scholarships under different schemes in this period. A sum upto Rs. 10 lakh was being extended as educational loan to the students irrespective of their income on a rate of just four per cent under the Mukhya Mantri Gyandeep Scheme.”

Emphasizing over the all-round development of the State, CM Virbhadra Singh said that his Government had ensured transparent, impartial, responsible and efficient administration to the people of the State. Historical decisions were taken to make Himachal Pradesh a leading State in the Country. Various ambitious projects and schemes were launched as a result the State was awarded two National level prizes in the categories of big states inclusive of development and education. Earlier, local M.L.A. Ajay Mahajan welcomed the Chief Minister and said that Nurpur college was a dream of his father,the former Minister late Shri Sat Mahajan.