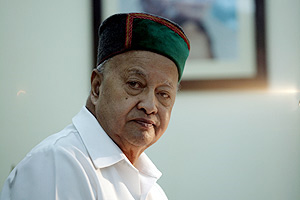 The Himachal Pradesh Chief Minister Virbhadra Singh honoured 35 persons across the State for their significant contribution in social and literary fields in a function organized at the Old Students Association Auditorium of the Dharamshala Government Degree College today, in the Samman Samaroh-2017 organized by the Focus Media Group. He honoured 10 persons for donating blood more than 100 times and 25 persons for their considerable contribution in the literary and social fields.

The Chief Minister also honoured the renowned veteran folk singer Pratap Sharma. Pratap Sharma is well known for his songs like thandi-thandi hawa je jhuldi, jhulde chilan de dalu and do naaran lashkidian talwaran. Speaking on the occasion, Chief Minister Virbhadra Singh called upon the media to work on the ideals set by Mahatma Gandhi and Bal Gangadhar Tilak. He exhorted them to play as watch dog of the society and work independently, impartially and fearlessly for the cause of the society.

He said that the State Government was committed to the welfare of the journalists and upliftment of the small and other newspapers and magazines. Various issues related to the journalists were being addressed on priority basis. Local M.L.A. and Urban Development Minister Sudhir Sharma also addressed the audience and expressed happiness over the expansion of media in Himachal Pradesh. He assured to extend his all help for the development of the media in Himachal Pradesh. The Chief Minister was also presented with a cheque of Rs. 21 lakhs by the H.P. Housing Urban Development Authority (HIMUDA) and Rs. one lakh by employee union of Kangra co op bank.