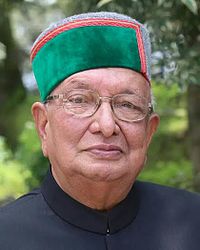 The Winter Session of Himachal Pradesh Vidhan Sabha concluded today amid prolonged political tussle between Himachal Pradesh Speaker Brij Bihari Lal Butail and Opposition BJP. The House witnessed another walkout by the Opposition BJP as the Speaker Brij Bihari Lal Butail refused to reconsider the suspension of three BJP legislators from the House for the Session.

Once again today, as the House assembled and the Speaker announced the start of Question Hour, BJP member Rikhi Ram Kaundal stood up and raised the matter of entry of suspended legislators Suresh Bhardwaj, Rajeev Bindal and Randhir Sharma in the Vidhan Sabha premises. Coming to his support the Leader of Opposition Prem Kumar Dhumal said, “The three legislators were suspended from the House and they should not be stopped from entering the Vidhan Sabha premises.”

Mr. Dhumal even raised objection on the legality of Speaker’s order of banning suspended legislators’ from entering the Vidhan Sabha complex. He said when any citizen can come to the Vidhan Sabha complex then why is the entry of an MLA being barred. Sensing oppositions mounting pressure, Speaker BBL Butail while justifying his decision read out the Assembly rules in the House. Quoting rules regarding the house in Vidhan Sabha, Speaker Butail said “precincts of the house means and includes the chamber, the lobbies, the galleries and the approaches leading thereto.” At this the BJP members staged a walkout from the House.

Later, Speaker Butail in his statement in the house said, “Dignity of the house was supreme and the act of the BJP legislators was derogatory to the Vidhan Sabha norms and they were punished to maintain discipline in the House.” Criticizing the opposition for their conduct in the House, Chief Minister Virbhadra Singh said, “The Speaker had acted as per rules and the opposition should be ashamed of its behavior in the House.”

Commenting on Leader of Opposition and former CM Prof. Prem Kumar Dhumal, CM said, “Leader of Opposition was trying to overshadow the Speaker to defend the misconduct of his party legislators.” Giving details of the business conducted during the Winter session Speaker Butail termed the session to be historic as the answers to all 248 starred and 120 un-starred questions were given online, and no hard copy was provided for any question put by the members. Besides this, five bills were introduced and cleared during Session, while 24 reports of committees were laid in the House.