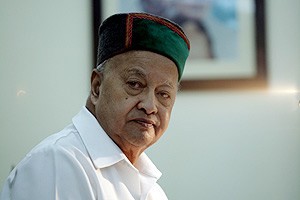 The Himachal Pradesh Congress Committee leader Sukhvinder Singh Sukhu today met with Chief Minister Virbhadra Singh for consultation on the prevailing deadlock as the two camps of party were making counter statements against each other. Mr. Sukh along with party senior leader G.S Bali met with Mr. Singh and discussed the issue in depth for one hour. Addressing media persons soon after the meeting Mr. Bali told that deadlock has ended as the two sides decided to stop the media statements on the issue.

There was some misunderstanding between the party state president and chief minister and the two have decided to calm down their respective camps and no more indulge in any statements against each other. Mr. Sukh also assured the Chief Minister that party would highlight the development work on the grass root level during its mass contact drive.

Chief minister Mr. Singh have been apprised by Mr. Sukh that party office bearers including 66 secretaries were being appointed on the approval of AICC and he should not make any statement against them as seven of them shown their written protest tendering their respective resignation. Mr. Bali said that now there would be no friction and there is no emergent situation of falling of the State Government due to differences in the party. He said that party workers would strengthen Congress under the leadership of Mr. Sukh in the organization and Mr. Singh on the Government level.

The Chief Minister’s statements during public rallies recently perturbed party secretaries as they were blamed by Mr. Singh for working against the interest of Congress leading to defeat of party on all the four Lok Sabha elections in 2014. Mr. Singh said that Mr. Sukh have elevated these secretaries on his own who did not have any mass base as they could not manage to win the panchayat member election on their own.