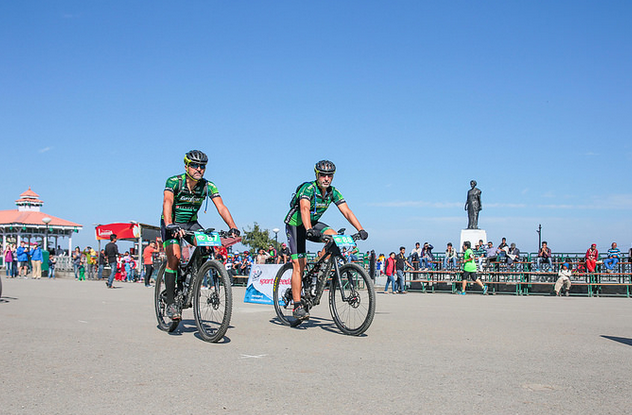 The 12th edition of Mount biking Himalaya was flagged off at historic Ridge ground in Shimla today. The Chief of Staff- Army Training Command (ARTRAC) Lt General Raman Dhawan who was chief guest, flagged off the event. Earlier addressing the bikers he said “We appreciate the great amount of effort put into the race by all riders. I wish you my best, enjoy the ride, enjoy the views, Goodluck!”.

63 riders were participating in the race the competition this year including Professional riders from teams like Kona Factory team, Rocky Mountain team are participating in the touted most difficult race across Asia. The 8 stage cross country stage is in it’s 12th edition now and is organised by HASTPA and supported by Hero Cycles. The race is taking a completely new route this year and will travel from Shimla to Dharamshala this year, covering the most toughest riding spots on the Himalayan map.

The Team has been been choosy to handpick the best campsite locations and the traditional Himachali cuisine serve as another delight for the foreign riders. The riders travelled a distance of 67.5kms and attained an elevation gain of about 1680mts on this stage. The stage called Balkhu’s epiphany started in Shimla and concluded for the day at Gadaguffar.

Former King of Himalaya- Cory Wallace finished the day 1 stage in 2hrs and 47 mins followed by Thomas Turner about a minute behind the Canadian Champion. Former Queen of Himalayas- Catherine Williamson finished with a timing of 3hrs and 22 minutes at  9 in the overall category followed by Hero Action Team’s Shiven. Rocky Mountain team participating under team of two are currently dominating the category. They finished at 4 and 5 in the overall category.

With this edition of the race, MTB Himalaya also initiated an initiative – SMILE, which aims at motivating and encouraging young people to dream and put those dreams in action. The team is covering all the possible schools on the way trying to reach and help as many students as possible, helping the society grow.