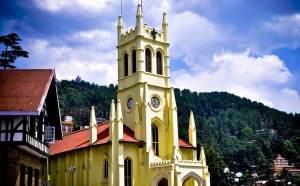 The Himachal Pradesh Chief Minister Virbhadra Singh said that the State government had repeatedly requested the Centre to amend the recommendations of the 14th Finance Commission and make provisions for devolution of funds to Zila Parishads and Panchayat Samitis. He said that the Commission had clearly directed that the funds would be provided to the Gram Panchayats only, though requests had been made by State government to provide funds for Panchayat Samitis and Zila Parishads as well.

Addressing a public meeting at Bhaloh in Gram Panchayat Bhaloh in Shimla Rural assembly constituency today Mr. Singh said that State Government had opened or upgraded over 1010 schools in the State. 24 ITI’s, 2 Engineering Colleges and 41 colleges had been opened during the present tenure of the Government.

He announced opening of Ayurvedic Dispensary at Bhaloh, Veterinary dispensary at Chaiwala in GP Neri and a sum of Rs 15000 to school children for promoting cultural activities. The Chief Minister said providing of drinking and irrigation facilities was the top priority of the State government. In Shimla rural constituency 70 percent of work on Rs 105 crore Gharog-Ghandal has been completed, which would facilitate 41 Panchayats of the area. Besides, Lift Water Supply Scheme,Pandoa Khud to Himri was also in progress to benefit seven panchayats of the area.

Listing other developments of the area, the Chief Minister said that a Law University and Judicial academy was being constructed at Ghandal and Mini Secretariat building was coming up at Dhami and  two sub tehsils at Dhami and Jalog. The Chief Minister accompanied by Irrigation and Public Health Minister, Smt. Vidya Stokes also inaugurated the drinking water supply scheme Parech-Dafawag-Dharat at Parech completed  with an outlay of Rs 43.52 lakhs.

This would benefit  three surrounding villages of the area with a population of over 500. . He also laid foundation stone of Primary Health Centre (PHC) Building at Totu to cost Rs 3.91 crore and inaugurated an X-Ray plant in the existing PHC Totu. He inaugurated Rs 2.04 crore observation home at Hiranagar in Totu. This would be the second correctional centre for juvenile criminals in the State after Una. He inaugurated the Gram Panchayat Building at Bhaloh in Bhaloh GP completed with an outlay of Rs 15 lakh.

Earlier, he also addressed a public meetings at Parech near Ghanahatti and Kadyachi and said that the Ghanahatti GSSS  would be made a Model School  with all facilities and subjects to be taught therein. He also laid foundation stone of Kadyachi to Tabhog road connecting three villages Didoghati, Karechi and Tabog of  Gram Panchayat Dummi and Pahal to cost Rs 2.21 crore adding that the road would soon be metaled within a year. He also laid foundation stone of PHC building at Sharda to cost Rs. 1.47 crore.