The seven-day long centuries old Mahashivratri fair of Mandi commenced this year on March 8 with the traditional pooja and the Grand Shobha Yatra headed by Madho Rai, the ruling deity of erstwhile sovereign Mandi State march to the sprawling Padal Stadium.

The HP Chief Minister Virbhadra Singh, Chairman Mela Committee Sanjeev Kadam, officials and elite of the town and over 200 hill Gods and Goddesses along with thousands of devotees dresses in multi-colour garments star attraction of the divine procession.

The town resounds with melodious tunes of over 2000 hill music instruments and orchestras played by the persons accompanying the Devtas marching with the Shobha Yatra.

The traditional fairs and festivals are the true manifestation of folk art and culture of the highlanders. However, with the passage of time and the impact of modern advancement in science and technology the fairs have also undergone a welcome change.  The exhibitions play a major role in educating the farming community about the new revolution in the spheres of horticulture, agriculture, floriculture and similar other fields for enhancing the income of the farmers. 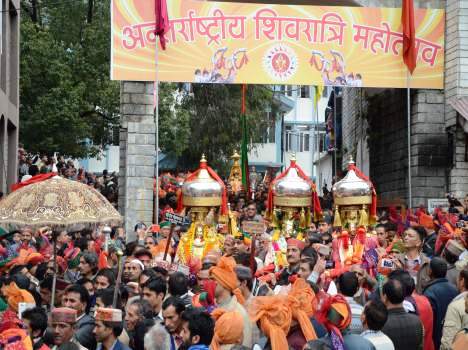 The origin of the Shivratri Fairs dates back to the era of Raja Ajber Sen of Mandi State, who ruled the State in 1500 AD. Legend has it that the land on which the present Mandi town has been established was once a dense forest where cows and cattles used to graze.  A villager was astonished to note that his newly calved cow was not yielding the desired milk.  He kept a regular vigil on her and found that she was spilling her milk on a stone in the forest.  It is said that this news spread in the town like a wild fire and also reached the king, who personally verified it.

In the meantime, it is said, another strange development took place.  Ajber Sen saw Lord Shiva in dream who ordained him to dig beneath the stone where cow was spilling milk. He did it and was surprised to find a large size Shivlinga buried beneath the stone. His joy knew no bounds when he found the Shivlinga. He made up his mind to build a big Shiva Temple, now known as Bhutnath.  He also decided to shift the town from Bhiuli to the present location of Mandi town.

The inauguration of the new Mandi town was fixed to celebrate the birth of the new town with a bang on the sacred day of Shivratri.  A mega celebration was arranged on this occasion.  All the hill deities were invited to grace the occasion.  The regal celebrations continued for over a month at that time. Since then the Shivratri Fairs are being celebrated year after year.  Now the duration of the fairs has been curtailed to one week only since independence. Now the role of the Raja is performed by the Deputy Commissioner and the elected public representatives. The Deputy Commissioner is also the chairman Shivratri Mela Committee.

During the rule of Raja Surya Sen (1664-1679), who had no heir as all his 18 sons had died during his life time, the sovereignty of the state had been vested in Madho Rai (Lord Vishnu). Therefore, in the subsequent years, Ratha carrying the silver image of Madho Rai has been leading the Shobha Yatra. The image of Madho Rai had been made by a goldsmith Bhima.

The silver image of the Madho Rai is still revered as before and his Ratha is in the forefront of the divine march of the hill gods and goddesses. After Independence, the Mandi State was merged in Himachal Pradesh. Now the role of the Raja is performed by the elected rulers (chief Minister) who performs prayer and joins the Shobha Yatra in keeping with the ancient traditions.

On becoming the Chief Minister, Virbhadra Singh himself a former ruler, enhanced the status of the Shivratri Fairs which were first declared as the state fairs,  then national fairs and finally these were elevated as International Shivratri Fairs in which the renowned artists from home and abroad regaled the people of Mandi.

The Himachal Pradesh Governor, Acharaya Dev Vratt will declare the seven-day International fairs on March 14 in keeping with ancient traditions. He will participate in the last Shobha Yatra starting from the temple of Madho Rai and terminate at the venue of the fairs in Padal Stadum. He will distribute prizes to the winner of the various event held during the fairs. The Shivratri Flag will be pulled down and handed over to the Chairman Shivratari Mela Committee.