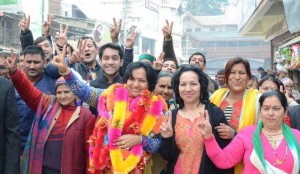 Ms. Champa Thakur daughter of the Health Minister Thakur Kaul Singh was elected as President Zila Parishad of Mandi district at the election held in Zila Parishad Bhavan Bhiuli this evening. All the 36 members of the Zila Parishad were present in the meeting. However, 3 members of the left parties staged a walkout as a protest against the policies of both the parties of Congress and BJP. Only 33 members took part in the elections.

Champa Thakur was declared elected by securing 19 votes as against 14 votes got by Pamita Sharma of the BJP. There was a tough fight in the elections of the Zila Parishad. Neither the Congress not the BJP had got the majority.

The post of the vice-president was also bagged by the Congress supported candidate Puran Thakur, President District Congress Committee. He defeated BJP supported Raj Kumar by a margin of seven votes.