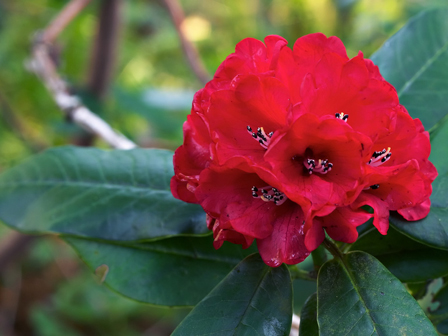 As the cold March out, and March in the flowers, woken from hibernation – red bloom the Himalayas with the cosmic Buraas.

Is it a bride decked in red or are these the – Juuini raa aahoo? Back in time, and in their prime, the brother Juuin – handsome and fair, boastful and proud, never lost an opportunity to tease his ‘dark’ sister Dhatri.

One day, Dhatri, as she painted with her shoonta her chool with clay, Juuin hopped along to say: “Try hard as you might, the black hearth and dark Earth, never can be white”.Dhatri, vexed, forgot her grace and smeared with her shoonta, her brother’s face. His beauty tarnished, Juuin walked on into the sky, with a heavy heart and a cry, as his aahoo fell on to his sister’s lap – where sprung the Buraas.

The Himalayas have many myths related to the rhododendrons or locally known in northern India as Buraas. The fresh flower of Buraas is believed to have the properties to dissolve fish-bones stuck in the throat. The rhododendron commonly found in the Himalayas belongs to the Ericaceae or Heath family and the Rhododendron arboreum (Rose Tree in English) species. It is also the national flower of Nepal where it is known as Lali Guras.

Another myth – in the Kumaon region of Uttaranchal – warns youthful girls against sleeping under the rhododendron trees lest they lose their virginity. But how and why? May be for the obvious reason that flowers – bright and colourful are there to attract bees, butterflies and entice drones. And men often in poetry have been compared to drones. Drones as such have acquired the dubious distinction of making buds bloom into flowers. And rhododendrons entice not only men and drones but Gods as well. On Sankranti, the first day of the year, village folks in some areas of the Himalayan region, ornate their roof tops with the rhododendron flowers to welcome and attract their village and family deities to shower their blessings on their houses and ward of any evil eyes.