The belief and the relief (Pic copyright: Saroj Thakur)

Just 5 kms. away from Baijnath, another temple attracts the devotees because of its timeless appeal–Maha Kaal—The abode of the mighty Shiva, the lord of the Destruction! This is the feeling that comes to mind when one thinks of the temple of Shiva at Maha Kaal! I would be filled with terror when we would pass by this temple while visiting home during winter vacations. My father used to tell us so many legends about the temple. One of these that made me feel creepy was that people from nearby areas would burn the dead at this place and it was considered as a place that would help them achieve salvation. Shiva, according to Hindu folklore, is Mahadeva, the supreme God.

Even though he represents destruction, Shiva is viewed as a positive force since creation follows destruction. And when my father would tell us that it was a ritual that a human corpse be cremated at this cremation ground everyday, I would question him, “what would happen if no one died some day?” I was told that “It was a practice that the dried grass be put to flames if there was no dead corpse some day.” I was so scared and started averting my eyes while passing through the road facing the temple! Perhaps deep inside me lurched a fear that they may not burn me if they found neither a corpse nor a dried stack of hay!

Once my Ma told me that taking a bath in the waters of the Maha Kaal on the Saturdays of the Bhadon month, of the Hindu calendar year, wards off all evils from one’s life. I was now eager to visit the temple as who doesn’t want to lead a happy and peaceful life? And if just by taking a dip in the sacred waters of a temple could do it, why take any trouble?

So one fine day, early in the morning at about 5 AM we reached the famous temple of Maha Kaal. There was nothing that could have frightened me as the place was so serene and tranquil in the early hours of the morning that all my earlier fears were dispelled and I was at peace with myself. But what surprised me most was that the temple clamoured with devotees even at this early time of the day. Such is the devotion of the people in the miraculous powers of the temple that the Saturdays in the month of Bhadon are not less than a small fair. Devotees come from far and wide to take a holy dip in the waters and pay obeisance at the Lingam of Lord Shiva.

The destroyer himself is the creator (Pic copyright: Saroj Thakur)

The bathing area for the women devotees was inviting enough for a holy dip. My mother, at this age, immersed in the water chanting holy mantras. I, too, followed my mother and took a holy dip in the waters of a tank that held clean water. My little one, too, followed me and took a dip. This surprised me as I had thought that she would just stand and watch us both take the ritual bath. I was happy at the transmission of the tradition and that too without being asked to follow. Outside the whole temple vibrated with the rhythm of devotion—the fragrance of the sandal wood mingled with the aroma of the burning Kapoor and the incence sticks—made even the non-believers seek shelter at the feet of the might Shiva—the ever-forgiving. The lighted lamps, the burning Kapoor, and the incence sticks provided the ambience that made the hearts melt of the impurity! It was as if the outer as well as the inner impurity was being burnt away! We felt so clean—both literally and metaphorically. 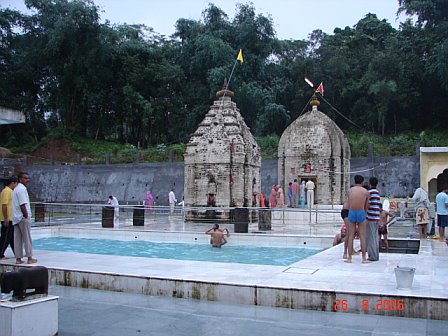 After taking the bath we went to the temple that held the Lingam and believe me it looked spectacular in the morning sun bathing it with golden light! It was a breathtaking glimpse—the return of the faith for us.

At some distance the Black coloured huge idol instilled a sense of fear in the minds of the on-lookers. The idol of Shani Dev, in black stone, looked fearsome to me! It looked like god of Death to me and I wanted to placate Him. We offered Black grams, Til and Mustard oil to the deity that would eradicate all our problems. I felt so humble thinking about death at that spot that the problems of life, seemed negligible. The mood had become solemn and I could remember all the stories about the cremation grounds that surrounds the temple. All the legends, heard to during my childhood, came rushing to me. But surprisingly instead of fear what I felt was immense sense of peace. I was suddenly bereft of any feeling of dread and was in a blissful state. 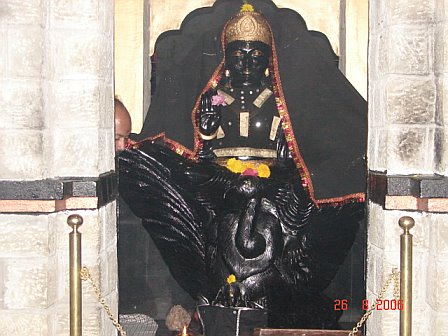 I was happy to have paid a long overdue visit to the temple of Lord Shiva—the destroyer who made new creations possible! It is the perspective that fills you with awe or bliss!