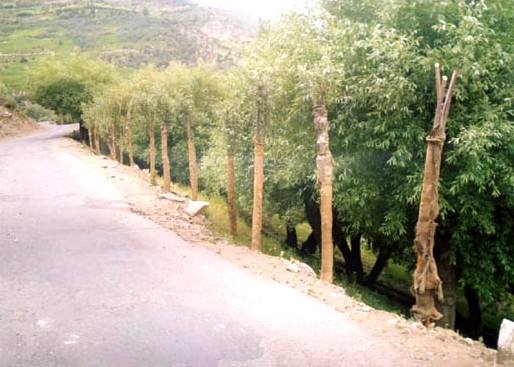 The roadsides of all the highways passing through Lahaul Valley in Himachal Pradesh with the launching of a plantation drive to various places of historic and tourists interest would leave one with a pleasant surprise. The endless rows of plants dotted on the roadsides of all the highways leading to various destinations within Lahaul valley appear in standing ovation to the visitors to this area.

The tribal belt which remains cut off for more than six months in a year has finally woken up to a novel innovation i.e. “Blooming Highways”. The roadside plantation or Blooming Highways is an Eco-Tourism Project presently underway in Lahaul and Spiti District. The entire landscape of Lahaul and Spiti is full of picturesque locations and serve as an invitation to the tourists and visitors to explore the scenic beauty and grandeur.

The roadsides plantation in Lahual Valley primarily envisages to maintain the ecological balance by planting locally adapted indigenous plants. The massive plantation drive under which more than 11,500 ‘posts’ of Poplar, Willow, Deodar ect. were planted, is one of the most successful campaigns with a survival rate of more than 70 percent. While undertaking this drive, the growth habit, climatic and topographical conditions were also taken care of. Initially, the Roadside Plantations proposed to raise the species of popular, willow, deodar, rubunia, rose bushes. However, to begin with, the district administration thought it proper to lay stress on the plantation of poplar and willow. Both these varieties are fast growing with a high rate of survival in the cold desert area. The plantation drive was taken up on all the three highways of Lahaul Valley.

These extend from Koksar to Keylong, Keylong to Darcha and from Tandi to mini-Manali near Udaypur. It is heartening to note that Deputy Commissioner, Lahaul Spiti district Shri R.Selvam has shown a keen interest in Highway Blooming. Project by involving all the Project Implementing Agencies and NGOs in carrying out this massive plantation drive in the month of March this year. The Departments of Forest, Agriculture, Horticulture, Irrigation and Public Health, Public Works and all the development blocks of DRDA were actively associated in this drive. Prior to the undertaking the plantation campaign, short duration awareness camps were also organized for the active participation of general public including Mahila Mandals. Yuvak Mandals and Watershed Development teams. 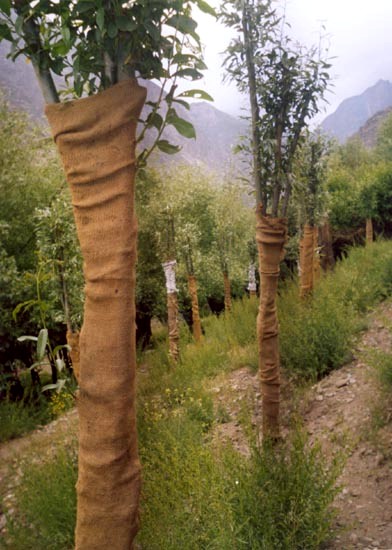 An expenditure of Rs. 1.50 lakh has been incurred on this roadsides plantation drive and interestingly it served a double purpose. Apart from making the barren roadsides of Lahaul Valley green, it also accrued economic benefits to the farmers. Each post or branch of a tree used in the plantation programme was purchased @ Rs. 12 from the farmers. Posts of plants were also procured from the department of Forest. Utmost importance has been given to the after care of plants. Tree guards have been provided to the posts by wrapping round them gunny bags (jute). The gunny bags infact were used for the storage of charcoal and after the consumption of charcoal thousands of these gunny bags saw their best use in the protection of plants. It was quite essential to protect the plants since the stray cattle are fond of the bark of willow, poplar etc. The Watershed Committees had been entrusted with the task of irrigating the plants atleast once in a weak.

Even tractors have been pressed into service for this purpose. However during the acute scarcity of water, GREF authorities will water the plants.