Exploring the great culture and heritage of this capital town Hindustani Classical Music exponent P. Rajan Mishra said that historic Gaiety theater has been remained centre of various musical activities in the past as many great musicians had performed here grinding their artistic ability amid conscious audience. 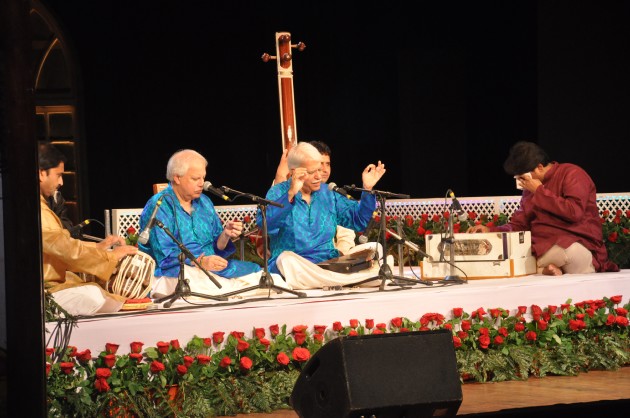 “We are here after a gap of 30 years in this famous theater and would like to perform time and again if this Shimla Classical Music Festival becomes annual feature,” duo of Pt. Rajan and Pt. Sajan Mishra who concluded five Day Shimla Classical Musical Festival with fascinating presentations at historic Gaiety Theater this evening observed.

Before starting their presentation Pt. Rajan Mishra said that such event should be organized here every year as they were missing it for long time.

In the two and half hour long presentation they also perform Raag Sohni, Raag Jhinjhoti and three Bhajans.

Emphasizing the knowledge of Master Pt. Rajan Mishra in between his performance that true master imparts time tested messages to his disciple as he himself first realizes them. He said that message left by great saint like Guru Nanak is unique as it is relevant in one life.

Chairman of Punjab Academy Ms. Anita Singh said that event would be repeated in the future as many music lovers of this capital town were missing it for long time.

The event was a part of series of program being organized this year on the occasion of 150 years of Shimla as Summer Capital of India (1964-2014).