Alone we can do little, together we can do so much

The recent HRTC Volvo bus and car accident in Chandigarh in which three students were burnt alive and NRI couple died has once again raised a question on the negligence of HRTC authorities and its drivers. According to a survey a total of five hundred and fifty bus accidents were reported in last two years out of which thirty were involving HRTC buses and this figure was reported in last three months. The driver’s fault accounted in most of these accident cases, which has accounted for multiple deaths in recent years.

These has been a significant rise in the bus accidents within Himachal. Just few days back a passenger bus went down into a gorge killing eighteen and leaving fifteen injured in Kinnaur district. In another unfortunate incident at Bilaspur, one person died and 25 were injured when a HRTC bus skidded off the main road near Malokhar.

Some students from Himachal (who did not want their names to be highlighted) are gathering at ISBT Chandigarh on 29th August 2014 at 7:00 pm to carry out a candle march protest in memories of all those who have lost their lives in such road accidents and to express their disillusionment against the authorities concerned. 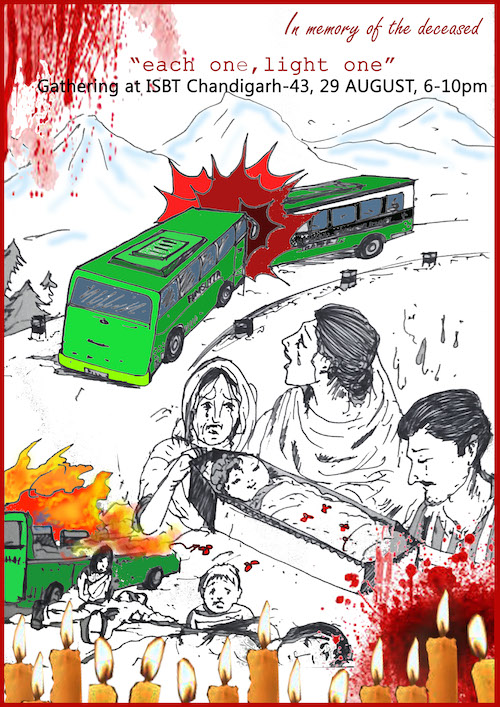 “It is a very serious matter and it is time that the HRTC authorities takes up some suitable steps to bring down the number of bus accidents in Himachal and outside. The fatal accidents are majorly due to speeding buses, drunken driving, overcrowding, absence of fire safety measures and missing emergency exists in Volvo buses. Most of the Volvo buses are not government owned and are being run by private operators The drivers of these buses drive rash and do what they desire on the road” says one of the student who will be participating in the candle march tomorrow.

The government should appoint a committee to check on the possible amendments and inquire into these bus accidents to identify the errors on part of these drivers or any technical faults. HRTC can improve road safety by a number of ways like by giving time-to-time trainings to the drivers and conductors on road safety and traffic norms.

“ About two hundred people are expected to join this silent march and the purpose behind this protest at ISBT is that more people who are traveling and halting at the bus station can join hands to raise their voice against these unfortunate accidents that really needs a strong protest from the locals of Himachal as well as from those who are settled at different places” says a student from Shimla participating in the awareness campaign tomorrow.