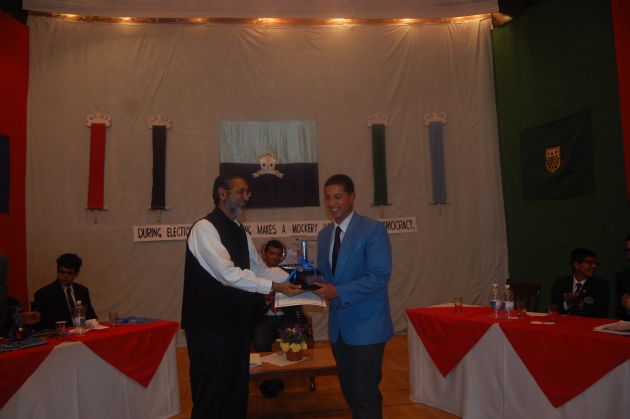 The event ended here on Saturday, Mr. Ved Mehta, of St. James’ was awarded the Best Speaker in the first semi-final as St. James’ School, Kolkata managed to defeat Loreto House Kolkata with the topic reading “It is time to end caste-based reservations in India in order to bring about social equality”.

The second semi-final featured hosts Bishop Cotton squaring off with international participants of Aitchison College, Lahore. The topic for the debate was “Corruption Is the Price We Pay for Progress”. The fourth speakers of the teams were called upon as the debate was adjudged as a tie.

In the evening, the much anticipated final debate was held between the hosts Bishop Cotton and St. James’ Kolkata with the topic being “During elections, image building makes a mockery of Indian democracy”.

The Chief Guest for the evening was Mr. Deepak Sanan, a very senior bureaucrat presently working as additional chief secretary in the Government of Himachal Pradesh. He is an eminent personality, a writer, and write for various columns and almost all newspapers.

The opposition side Bishop Cotton managed to get the title under their belt as Yashvardhan Singh and Ankit Gongal of Bishop Cotton bagged the Best Speaker award while Ved Mehta of St. James’ managed the 3rd position.

The individual prizes were as follows:

The whole program was conceptualized and planned by the Master In-charge debates Mrs. Sushma Kaul under the dynamic leadership of the
Headmaster Mr. R. C. Robinson.

The debating event which lasted for a period of five days was successful in strengthening bonds between elite schools from across the country as well as maintaining the highest standards of total education.