I stay in Delhi, and I am really pleased to inform you all that while going back to my home town Shimla I prefer the HRTC buses, for their up-keeping. The staff is really cooperative unlike the Haryana Roadways and Punjab roadways, who are rude and can desert you halfway on some pretext or the other. But you cannot say about this HRTC buses. The staff is cooperative. 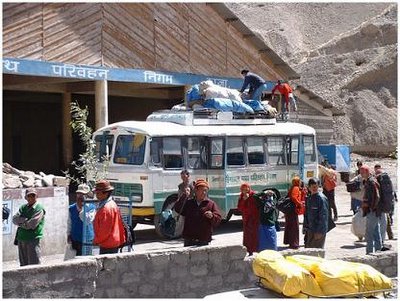 And let me put it this way that we should not make the mantrijis to be accountable. Somewhere we have this habit of making the ministers accountable for our own undoings. Let me put it directly. How many of us refrain really from boarding an overcrowded bus even with the knowledge that there is another bus coming behind?

In Jubbal, where I throng from, it becomes very difficult for the conductors to explain to people that they should not travel on bus roof tops. It is a general trend there that I have seen that passengers will throw in the sacks of grains and tins of oil inside the bus as it is easy to throw them in rather than carrying them to the roof. They would themselves travel on the roof. I have had personally had arguments with people, with conductors, when during apple season, people put apple boxes inside the bus, in places where passengers can travel standing. Seeing no place to stand the other passengers are forced to travel on roof. As I mentioned earlier of the cooperativeness of the HRTC staff, it is this very factor that somehow goes against them as they are too scared to ask sternly the passengers to cooperate with them. So the reason here is that while the staff is cooperative the passengers aren’t. And accidents are bound to occur in such cases. You cannot make the mantris accountable for that.

Let us not forget another aspect, with modern buses plying with greater manoeuvrability, drivers tend to drive fast and even we passengers to some extent want that, as we want to beat time. How many of us really have cared for safety and asked the driver to slow down? Till we reach safely, we are happy with the driver’s speed but as soon as we meet an accident, we blame the driver for over speeding or mantriji.

Let us agree that Himachal is a hilly state and comparing this to other hilly states we are almost 50 years ahead of them as far as inroads into villages are concerned. Covering areas is concerned and bus numbers are concerned. Surely because of the rough and unfriendly terrain we cannot compare Himachal with Punjab or Delhi. But we have done a lot better.

HRTC may not be having CNG buses (which I doubt can have a pickup) but we have the best hydraulic and power steering buses which even many of the Haryana Roadways aren’t. HRTC buses have greater manoeuvrability than most of the Punjab Roadways.
If we can vote for a mantri why cannot we too cooperate with that mantri. It is our property. If facilities are given to us, why cannot we use it properly?