A one day mountain bicycling event was successfully conducted by HASTPA on 15 July 2012 in Shimla. The event was run over a route of about 40 km of which 17 km was the competitive section where riders were timed to ascertain their performance. 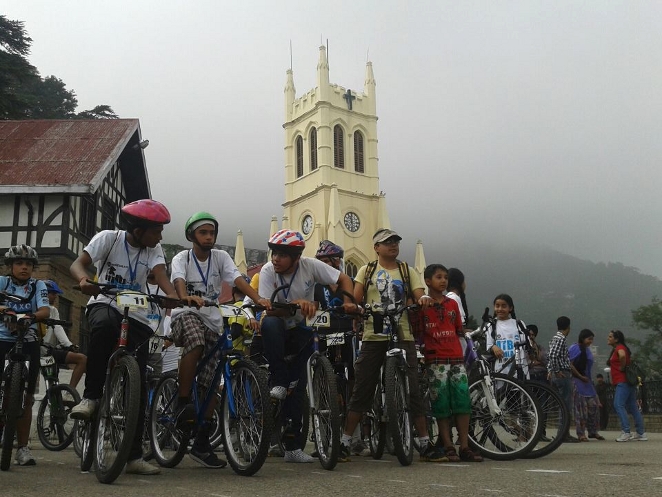 About 37 riders were flagged off at 9:45am in morning from the Ridge maidan by Lt. Gen Rajesh Kochhar, Chief of Staff ARTRAC. Speaking on the occasion Lt. Gen. Kochhar said that it is essential that people undertake adventurous activities for a fulfilled life and also applauded the efforts of HASTPA in bringing the sport of mountain cycling to the people. 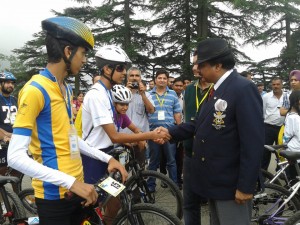 The riders rode on Lakkar Bazar, Bharari onwards to Kamyana from where the competition started. Riders were flagged of from Kamyana in groups of 6 riders each. They then descended to Kiarkoti on a gravel road for 10 km before climbing 7 km to join the Shimla Naldera road at Sadhora.

After a lunch halt at Talai, riders rode in a group back to the Ridge where the prize distribution ceremony was held presided over by Mr. M.P. Sood, Municipal Commissioner, Shimla. Speaking on the occasion Mr. Sood said that it was great to see that HASTPA is promoting cycling which is an easy way of staying healthy and enjoying the natural beauty. He also added that the Shimla Municipal Corporation is also attempting to do its bit to promote cycling and had prepared a proposal wherein a number of cycle stands would be installed in different parts of Shimla to encourage people to take up cycling.

Riders were very happy with the arrangements and the route chosen for the ride and promised to return whenever the event will be organized again. 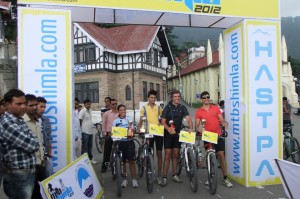 Winners in each category were given a trophy and a cash prize of RS 3000, 2000 and 1000 for 1st, 2nd and 3rd position respectively. Winners of the Men Solo and Women Solo were also offered free entry to the weekend edition of the MTB Himalaya scheduled to be flagged off on September 28, 2012.