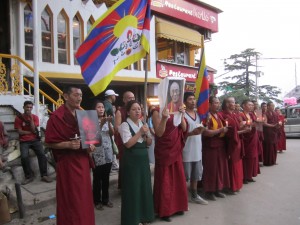 Thousand of Tibetans, locals and tourists turned up for a protest candle march at Mcleodganj in memory of the victims of the recent self-immolations in Tibet. The brutal repression of the Chinese regime has again came into limelight with 33 year old Rechok setting herself on fire in Eastern Tibet leading to her death. The protestors raised slogans demanding freedom for Tibet and the return of His Holiness , the Dalai Lama back to his homeland.

Just three days before this, two young Tibetans, Dorjee Tseten, 19 and Dhargyal, 25 set themselves on fire. Rechok is the 6th women who gave her life for the freedom of her country leaving behind her children and family. “On behalf all the Tibetan women in exile we salute their sacrifice”, said Kalsang Youdon,the President of Regional Tibetan Women’s Association.

With threats of more and more self-immolations in Tibet, Lobsang Sopa, General Secretary of Regional Tibetan Youth Congress said that ” We are concerned about the direction of the Tibetan independence movement. It is upto the Chinese government to bring about a peaceful solution for the Sino-Tibet issue”.