Himachal Pradesh Chief Minister presented his fifth budget in the State Assembly on 19th March. This was the longest budget speech in the history of Vidhan Sabha. In his 82 page speech Prem Kumar Dhumal read in Hindi with 189 sub headings, lasting two hours and twenty minutes. 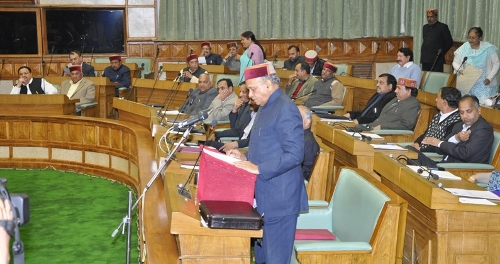 As per Budget estimates for 2012-13 total revenue receipts are estimated at Rs 16342.98 Crore and the total revenue expenditure is estimated to be Rs 15969.19 Crore leaving a revenue surplus of Rs 373.79 Crore. The expected receipts in the capital account of the government are Rs 3331.59 Crore apart from Rs 650 Crore in public accounts including Provident funds etc. Capital expenditure including loan repayments is estimated to be Rs 4274.73 Cr.

Some of the higlights of the budget are: