Shimla (Jan 11): Mercury plunged to seasons lowest in Himachal Pradesh after heavy snowfall and formation of frost on accumulated snow. Night temperature at Keylong dipped down to minus 15.4 degree Celsius and tourists destination Manali was at minus 6.6 degrees, the Met office said here today.

According to Met office Shimla director Manmohan Singh, last night was coldest in the state 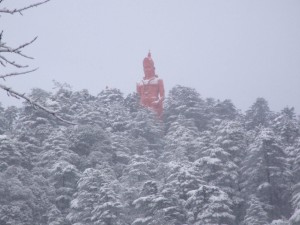 this season as most towns were at or near freezing point.

Kalpa town in Kinnaur district recorded a low of minus 7.7 degrees, Solan town was low at minus 1.8 degrees, Bhuntar in Kullu at minus 1.2, Shimla minus 0.9 degrees, Sundernagar minus 0.4 degrees, Palampur Kangra 1.5 degrees, Una 2.2 degrees, Dharamshala 2.5 degrees, Mandi 4 degrees and Nahan 6 degrees.

Due to hardening of snow layer on roads and formation of a thick layer of frost, movement of traffic was disrupted in Shimla town during the morning. In the afternoon sky the was cloudy, however, tourists were seen enjoying in the snow at Manali, Dalhousie and Shimla after the administration managed to clear the Ambala-Khab NH-22, Chandigarh-Manali NH-22 and Pathankot-Dalhousie state highway.

The Met Department forecast mainly dry weather in the state during next 24 hours, ending five days of inclement weather conditions.