Dharamsala: On Friday 28 October, starting at 10am, thousands of Tibetan exiles will be invited to help leading Tibetan artist, Tenzing Rigdol, dismantle his installation “Our Land, Our People”, by taking the soil away with them. The 20,000 kilograms of soil, transported from Tibet to Dharamsala, home of the Dalai Lama, the Tibetan government in exile and more than 10,000 Tibetan refugees, is currently displayed on a massive stage. Over the course of two days, around 6,000 Tibetan and local residents of Dharamsala have visited the installation.

The Dalai Lama blessed some of the soil at his residence on the opening morning. “His Holiness took one look at the soil, and then proceeded to write the Tibetan word for “Tibet” in the soil,” said Rigdol. “It was incredibly uplifting to see His Holiness carve the most simple and powerful message on the soil, unequivocally claiming it as Tibet, his and our beloved homeland.” 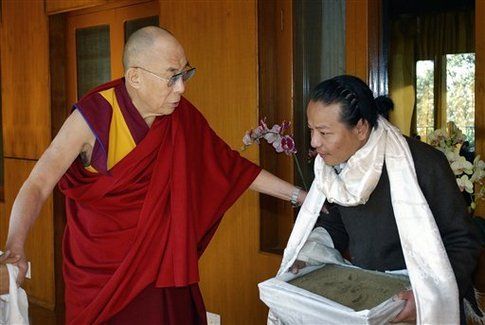 Dr. Lobsang Sangay, the recently elected Prime Minister of the Tibetan government in exile, was the first person to step on the soil during the opening event Wednesday morning. Many Tibetans offered prayers and prostrations on the soil, while others read poetry, delivered impromptu speeches, and sang traditional Tibetan songs. Elderly Tibetans, some of whom have been separated from their homeland for over five decades, wept as they touched the soil and prayed to an altar with the Dalai Lama’s photo built by the public.

“If merely walking on Tibetan soil here generates such an emotional response, how would it be to walk on Tibetan soil in Tibet,” said Tenzing Rigdol, who is a Tibetan exile educated at the Tibetan Children’s Village, where the site-specific installation is being hosted.

Through Rigdol’s work, Tibetan refugees living in Dharamsala, who have been separated from their families and are forbidden from returning to their homeland, had a chance to step on Tibetan soil. For some, it was the first time in more than fifty years that they have walked on Tibetan soil; for many, born in exile, it was the first time in their lives.

In 2007 when Rigdol’s father fell ill while living as a refugee in New York. His only desire, to visit Tibet just once before he died, went unfulfilled. It was in his father’s dying wish, exemplifying the exile Tibetans’ longing to return to their country, that Rigdol found the inspiration to pursue the project.

About the artist: Tenzing Rigdol is a Tibetan contemporary artist whose artwork ranges from painting, sculpture, drawing, collage, digital, to video installation, site-specific and performance art. He has extensively exhibited his artworks throughout the United States in various museums, and also in London, Shanghai, Beijing, Hong Kong, Tokyo, Israel, Madrid and Mumbai. Rigdol’s artwork is held in museums and collections worldwide and is represented by Rossi & Rossi gallery in London. Additionally, he is also a poet. His poetry books titled “R”—the Frozen Ink (2008), Anatomy of Nights (2011), Butterfly’s Wings (2011) were published by Tibet Writes. He lives in New York.