Nahan: After introducing Hirdaya Ram, HAS officer posted as Additional Deputy Commissioner Kaza to be the next candidate from Renuka Assembly constituency there seems to be revolt in the BJP camp in the district. 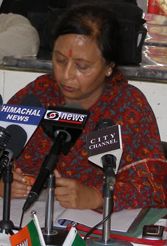 The seat has become vacant after death of Congress MLA, Dr. Prem Singh. BJP tried to project its new candidate in a party public meeting at Gattadhar and Sangrah as Mr Hirdaya Ram was accompanying Chief Minister Prem Kumar Dhumal on stage at both places.

In both the public meetings party could gather about 500 people, which the party rebels pointed our to be be a gathering of Government employees.

Shayama Sharma senior leader of BJP from the district and a former minister galvanized the support of party workers at her residence yesterday showing protest against state leadership over projecting Mr Ram.

More than thousand supporters gathered at her residence yesterday and decided to bring out a rally in town to register protest against the behavior of her opponents.In a show strength many panchayat pradhans and up-pradhans were present in yesterdays meeting.

The incidents of last two days are certainly bound to effect BJPs chances during the next Assembly elections.