Shimla: It was the first occasion in the 41 year history of Himachal Pradesh University when students with disabilities showcased their talent on the stage in the university auditorium. A large number of professors, students and non-teaching staff witnessed their acting, songs and dances in a programme organized by Umang Foundation, a Shimla based public welfare trust, on 24th August, 2011. The cause was supported by Himachal Pradesh University.

Five brilliant students with disabilities were given Umang Foundation’s merit 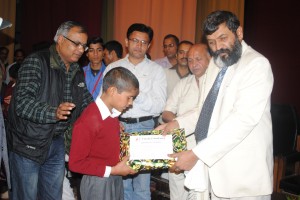 scholarships by Vice Chancellor ADN Bajpai. As many as 14 school students with visual disability, who brought laurels for the state in national level blind sports meets, were also felicitated in the function. It was an attempt to sensitize people, particularly university community, about issues related to disabilities, said Ajai Srivastava, chairman of the foundation.

The program started on a note of gaiety with Vice Chancellor Bajpai lighting the ceremonial lamp followed by the University anthem. In the cultural program hearing impaired students from Institute for the Blind and Deaf, Dhalli, Shimla presented a skit “Unity in diversity” and showed their skill in Indian Sign Language.

Visually impaired children of the same institute showcased their talent by singing “Hum honge kaamyab ek din”. Intellectually disabled girls of Udaan Institute also presented beautiful dances. Ajai Srivastava said that Umang Foundation has been felicitating the blind students for the last couple of years for their achievements in sports at National level. These students have won 11 gold and 2 silver medals in the National Blind Sports Meet held in Amritsar last year.

Disability courses will be started at HPU

Vice Chancellor of Himachal Pradesh University ADN Bajpai has announced that courses on disability will be started at its proposed Centre for Disability Studies. While inaugurating a programme organized by Umang Foundation, a Shimla based public welfare Trust, at the University Auditorium on Wednesday to showcase talent of the students with disabilities, he also stated that the campus will be made barrier free for smooth movement of the disabled.

He said the centre would start research and documentation in the field of disability and would also create awareness on issues of disability in the state. The university has planned to set up the Centre as per the recommendations of high powered group of minister (GoM)Your browser may not support display of this image. and the guidelines of University Grants Commission.