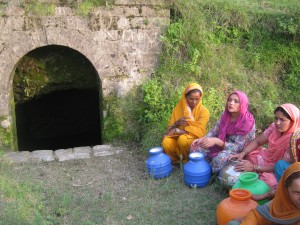 was screened in the conference hall of Information and Public Relations Department here today. The Film titled as’Khatrian-Vilupt Hoti Jeevan Rekhaayein’ (Khatrian- withering lifelines) was previewed by about hundred film lovers and staff members of the department. The prime focus of the film is to highlight the importance, utility and conservation of traditional water sources of Khatris in Bamsan area of Hamirpur district.

The 15-minute documentary left the audience mesmerized and all were praise for choosing a rare subject. The film traces the history of ‘Khatris’ and links them to the rich civilization and heritage of the people of Bamsan area, who since times immemorial had been struggling hard for drinking water. The film highlights the fact that with the supply of drinking water through various drinking water supply schemes, the people have forgotten the use of ‘Khartis’. However, some old people are still maintaining these and are using their water regularly.

Lauding the efforts of Rajendra Rajan, Chief Guest Shri BD Sharma, director, Information & Public Relations, said that the ‘Khartis’ were the unique symbol of conservation of traditional water sources and the film has been successful in conveying the message to the society that we should not forget the immense importance these sources.