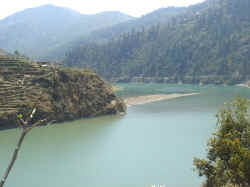 Govindsagar, a man-made reservoir spreads in about 168 square km area and spanning 90 km of Satluj’s course, has been witnessing fall in fish production.
“Currently ‘Silver Carp and ‘Catla Catla’ were being grown in the dam but Carp production is sharply dwindling as it has come down to 250 tones from existing 750 tones in last three to four years, whereas the dam has total fish production of 1100 tones annually,” the director said.

Sharma pointed out that production was declining due to major change in water quality and surging of silt load in the river as a number of new hydel projects were coming up in the upstream areas, beside coning up of new dams was also creating barriers in the free migration of fishes, which normally move upstream for natural breading in search of cold water.

The official informed that Carp migrates 40 to 50 km above their feeding habitat to find suitable breeding ground as it has been seen breeding at the banks of Rampur town in this district by experts. Sharma said that Silver Carp and Catla Catla fingerlings or seeds were sown by the department in the reservoir while fisherman were allowed to collect fishes except in breeding season as they were getting 85 percent of its production while departments charging royalty of 15 percent from the fishermen.

Siliver Carp was imported from China in 1971, and was thriving well in the reservoir since its coming up in 1960s. It fetches low price band of Rs 35 to 40 per kilogram in the market while Catla-Catla fetches around Rs 71 per
kg but the former is considered good business because of its better production. The department has not yet conducted any study to ascertain the exact cause of its reduction in Govindsagar, but declining water level and quality could be the main reasons. Official fear that fisherman may may have to abandon collection due to low production.

The three strains of fishes Silver Carp, Catla Catla and Trout being grown prominently differ in their capacity to grow in different climes as Silver Carp is used to live in clear water and warm water but fond of cold water for breeding, while Cattla Catla grow and breed in warm water, therefore may thriving in Govindsagar lake despite high silt level. Howeover, Trout can only live in fast-flowing rivers.

He said that artificial water bodies like Govindsagar, Pongdam (on Beas river) and Chamera Dam (Chenab) have enormous fish production potential feeding about 6,500 fishermen and 150 fish farmers in the state but lmigratory birds were feeding on them, which was give rise to a new wetland ecosystem.

Govindsagar has annual potential to produce 1,100 tone fishes to the tunes of Rs 5 to 6 crore, Pong Dam 300 tones and Chamera 2 to 3 tones.