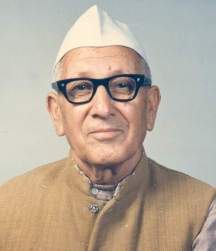 Shimla: As we celebrate the 61st anniversary of Indian Independence, we are deeply indebted to those great heroes of Indian freedom struggle, who sacrificed everything for its sake. Himachal Pradesh, too, has its contribution in freedom struggle with a number of freedom fighters whose names have been written in golden words. Vaidya Surat Singh is one among them.

His paternal village was Katogra though he was born to Devi Singh and Munni Devi on 08 Dec 1912, at Chakhal village of Tehsil Rajgarh in District Sirmaur. He was deprived of mother’s love when he was merely of three years as his mother died after a prolonged illness.

He did his basic schooling from a Sanskrit Gurukul in Fagu, Sirmaur. After that he went to Punjab University, Lahore to study ‘Visharad’. After passing Visharad, he went to Ayurvedic College Rishikesh and achieved the degrees of ‘Ayurved Visharad’ and ‘Ayurvedacharya’.

During his stay in Uttar Pradesh, as a student, which was the centre of Indian freedom struggle, he got inspired by Gandhiji and took active part in burning of imported clothes and picketing of liquor shops.
Now he was known by the name of ‘Vaid Ji’ as he started his practice at his paternal village in Katogra and even used to go to remote areas for treatment of patients on his horse.

In 1939, he jumped into ‘Sirmaur Prajamandal’ agitation and played an active role in its success. His wife Sunehro Devi was also an emminent freedom fighter. In 1941, Mahatama Gandhi started Quit India Movement. Like other Maharajas, Maharaja of Sirmaur, Rajender Prakash was supporting the British Empire by contributing financially and militarily. People were forced to join military and to deposit ration in Maharaja’s depots compulsorily. Vaidya Surat Singh along with other eminent freedom fighters of ‘Pajhota’ in Sirmaur conducted a huge public rally at village ‘Taproli’.

Pajhota area comes under tehsil Rajgarh of district Sirmour which is situated to the north west of district headquarters in Nahan.

People chose him as the leader of ‘Pajhota Andolan’, which was a part of Quit India Movement and he requested them of following the path of non-violence in their agitation as preached by Mahatama Gandhi.

On 10 Jun 1943, three storied building of Vaidya Surat Singh in village Katogra was blasted by dynamites by military. On 11 June 1943, police and military opened fire on agitators in Kulath village in which Kamna Ram died on the spot and several others were injured.

Later 69 agitators were arrested and jailed in Nahan. The main leaders including Vaidya Surat Singh were given inhuman treatment in jails. Some agitators were released in 1946 and 1947 on the birthday of Maharaja Sirmaur. But Vaidya Surat Singh, Basti Ram Paharia and Chet Singh were released few months after the independence, on 17 Mar 1948. Vaidya Ji wrote many poems and songs in jail, in Hindi, Urdu, Sanskrit and Pahari. Some of the lines of a song, written by him in jail, go like this:

Personality with many qualities, Vaidya Ji died on 30 Oct 1992 at his village in Katogra. His marble statue was inaugurated, in his memory, at Habban in District Sirmaur, on 11 Jun 1994, by the then Minister of State Home Sh. Rajesh Pilot. Senior Secondary School of Rajgarh has been named after him. In 1992, Pajhota Freedom Fighter and Social Welfare Society Habban was established in his memory to facilitate and look after the problems of families of freedom fighters, to preach nationalism in society and use of Swadeshi, with his son Jai Prakash Chauhan as its Chairman.

Dr. YS Parmar, the first Chief Minister of Himachal Pradesh had a great respect for him. He always lived by his principles because of which people looked up to him. Being known to him personally, I still remember an incident when once the State Govt. gave him a car with a driver and wanted him to take over the Chairman of some Board. He refused the offer and sent the car and driver back and demanded a bus service for his area, instead, as committed by the Chief Minister.

He rose above casteism, being Arya Samaji, at a time when people could not even imagine thinking otherwise on the issue. He reached out to fellow human beings, irrespective of their class or status, with a telepathic understanding and devotional sense of commitment.

He, the ordinary mortal, eventually scaled heights which were built essentially on the foundation of strong moral convictions. He sketched his own image, which came to acquire a frame that became larger than life with his weapons of non-violence and of truth in a world full of diplomatic untruths. No wonder people recognized him as “Vaidya Ji’, since he not only treated the society for diseases but for social evils too.

We salute this pious soul today and wish if the leaders and politicians of today can emulate some of his qualities and principles.